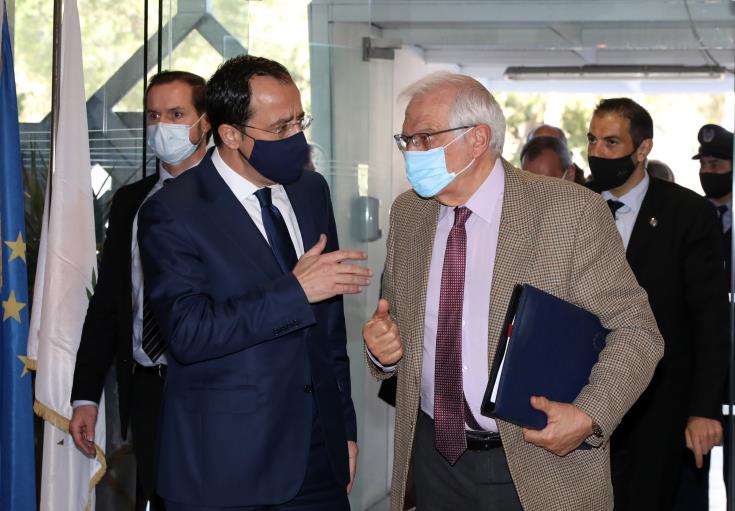 Josep Borell, High Representative of the European Union for Foreign Affairs and Security Policy and Marija Pejcinovic Buric, Secretary General of the Council of Europe, expressed concerns over the harassment and intimidation of Turkish Cypriot journalists by Turkey and their intimidation within the Turkish Cypriot community, in letters of reply they sent to Cyprus Minister of Foreign Affairs Nicos Christodoulides.

At the same time they express their full support to the freedom of speech and expression and criticise Turkey for its actions.

Christodoulides had informed the two European institutions in his letters on January 4 and February 1st 2021 to Borrell and on February 17th to Buric about the situation as regards the targetting of Turkish Cypriot journalists and especially Şener Levent, of Ayşemden Akın – who are prosecuted in Turkish courts – and Esra Aygın, who was attacked and threatened over her comment about the current Turkish Cypriot leader, Ersin Tatar.

CNA has seen the letters of Borell and Buric to Nikos Christodoulides dated the same day, February 9, 2021.

Borrell expresses “grave concern”, we will not compromise on freedom of expression, he stresses

In his reply letter to Cypriot Foreign Minister, EU’s High Representee and Vice president says that EU views with grave concern any attempts to undermine the freedom and pluralism of the media in the Turkish Cypriot community. Media freedom and freedom of expression are key to a functioning democracy, he stresses.

He says that he is aware of the lawsuits filed against Levent and the troubling history of intimidation and harassment that he has suffered. He is also closely following the recent legal actions taken in Ankara against Ayşemden Akın and the situation of Esra Aygın.

“Journalists play a fundamental role in providing timely and factual information and ensuring accountability of those in power. Their influence –and the responsibility that comes with it –cannot be overstated. The EU has,at all levels and in all fora,expressed its opposition on the erosion of freedom of the media in Turkey”.

Borell stresses that as a candidate country and long-standing member of the Council of Europe, Turkey is expected to apply the highest democratic standards and practices, including ensuring the freedom of expression and the freedom of speech. We  are  also  in  close  contact  with  the  Council  of Europe  and  the  OSCE  regarding  the  cases  of Mr Levent and Ms Aysemden”.

The EU will continue to defend freedom of expression and protect those who make use of  this fundamental freedom to keep us informed every day, Borell adds.  “It is something we neither can, nor will, compromise on” Borell stresses to his letter to Christodoulides.

In her letter replying to Christodoulides, Pejčinović Burić says she is “following the situation with great attention” noting that the concerns expressed in his letter to the CoE, have also been included in an alert published on the Platform for the protection of journalism and the safety of journalists.

She assures that “the safety of journalists remains high on the Council of Europe’s agenda, as part of its action to guarantee the full respect for freedom of expression”.

The ECHR in its case law, the Council of Europe`s Secretary General adds, “accords to the press the broadest scope of protection under the Article 10 of the European Convention on Human Rights,” noting the recommendation of the Committee of Ministers, CM/Rec (2016) 4 on the protection of journalism and safety of journalists and other media actors, which has been accompanied by a number of practical tools for implementing this recommendation.

Buric states that the CoE Conference of Ministers responsible on Media and Information Society, which will take place next June at the invitation of the Government of the Republic of Cyprus and the CoE, “is expected to agree on further actions required to address the ever – worsening situation for the safety of journalists and other media actors.”

She also underlines the CoE Secretariat`s readiness “to contribute to efforts aimed at ensuring the effective protection of freedom of expression, freedom of the press and the safety of journalists in our member states, in full compliance with the Organisation’s relevant standards.”

CNA has learnt that the Foreign Ministry is satisfied with the recognition of the seriousness of the problem by the EU and the CoE adding that the issue has been identified and is being monitored by the OSCE. The Foreign Ministry “intends to continue to raise the issue, while the harassments and intimidation of Turkish Cypriot journalists from Turkey and the occupation regime continue,” Ministry sources told CNA.