EU Ambassador to Pakistan: ‘We are working together to address emerging global challenges’ 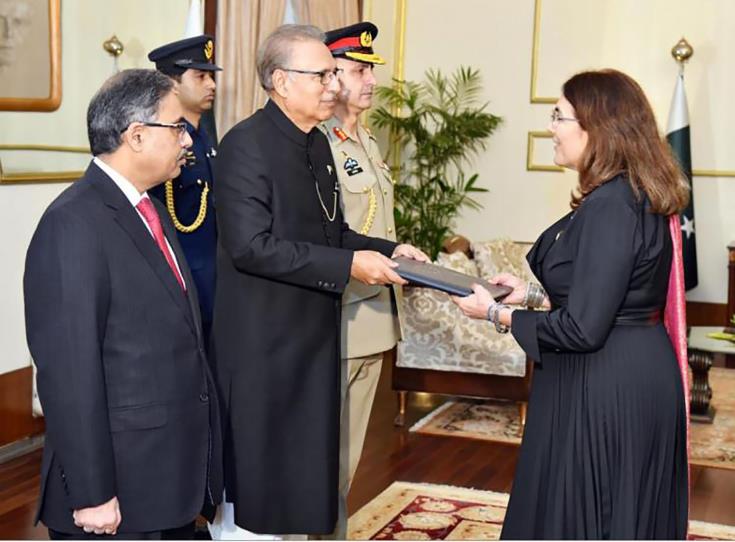 EU and Pakistan continue to enhance bilateral cooperation, as the two sides work closer together to address emerging global challenges, says Androulla Kaminara, the EU Ambassador to Pakistan. In an interview with CNA, Kaminara notes that since 2014, Pakistan`s exports to the EU have witnessed a growth of 51%. At the same time, the Union firmly insists on Islamabad`s progress in a number of areas, including human rights and the environment.

The first woman EU Ambassador to Pakistan since 1985 and one of the few Cypriot women serving in senior EU positions around the world, Kaminara notes that trade is one of the cornerstones of EU relations with Pakistan.

At the same time “Pakistan must demonstrate concrete progress in the implementation of 27 core international conventions on human and labour rights, environmental protection and good governance. As a result, more than 78% of Pakistan`s exports enter the EU at preferential rates, the majority of them being from the textile sector” she says. From €4.6 billion in 2013 export rose to €6.9 billion in 2018, making the EU Pakistan`s largest export destination.

“There are exports to Cyprus that focus on bed-sheets and towels and I have already found Cypriot haloumi on the market here” Kaminara says.

According to the Ambassador, the main focus of EU-Pakistan cooperation is domestic and regional stability, economic prosperity and social development. The two sides signed last summer a Strategic Engagement Plan (SEP), to enhance further engagement between both sides in traditional areas such as peace and security, democracy, rule of law, human rights, migration and trade.

At the same time, the SEP also introduced cooperation in increasingly important areas such as energy, climate change, connectivity, education and culture, and science and technology.

Asked how her Cypriot heritage influences her work, Kaminara is quick to spot the similarities between her home country and Pakistan, despite the vast differences in terms of size and population.

“Both countries have a very complex history of large population displacements which influence current affairs, both are in a very volatile regional context, in both countries family ties are very strong and there are links to your birth village or town, religious issues are important, hospitality is very much valued, both peoples are very friendly and both love food and debate at length on the best recipe for various dishes” such as biriyani or souvla, she says.

The EU Ambassador also refers to her past professional experience and the way it shaped her. “A lot of the times people react negatively to ‘others’ because of fear of the ‘unknown’ and because of lack of contact with ‘the other’ people. I have had this conviction all my life, but due to my humanitarian aid experience and from having visited so many disaster areas and countries in the world, my firm belief is that there is a lot more that unite us than divide us in the world.”

“It is with this mindset that I am approaching every new challenge in Pakistan and I have to say that in view of this, I feel quite at ease here” she adds.

Kaminara presented her credentials to the President of Pakistan, Arif Alvi, last November, at around the same time when Brussels was preparing for a change of guard in EU leadership. Having a woman, President Ursula von der Leyen, at the helm of the European Commission, and a gender-balanced group of Commissioners is a huge achievement, she says.

Referring to future challenges, Kaminara notes that the world has become increasingly complex and subject to even more rapid change. “This creates both opportunities and challenges. Over the next five years, the EU will look to strengthen its role in this changing environment” she adds.

Furthermore, she notes how the European model has been questioned in recent years. “However, if one looks as the history of European integration it is evident that the European Union integration has leap-frogged forward each time there were challenging events” she says, adding that today’s challenges – climate change, migration, economic crises – cannot be addressed effectively by national governments.

“Together, we Europeans can develop ideas and lead the way in addressing those challenges in a manner that is beneficial to all Europeans and our friends across the globe” she says.

The EU Ambassador also notes that  Pakistan has been generously hosting over 1.4 million registered Afghan refugees for four decades and it is one of the top five refugee hosting nations in the world. If one considers the unregistered refugees, this number could be as high as 3 million refugees, she says.

Kaminara, who has extensive experience with EU humanitarian work, says that the EU continues to provide humanitarian aid to Pakistan, working towards durable solutions for Afghan refugees and their host communities in the region.

In November 2019, the European Commission allocated an additional €40 million in emergency assistance for those affected by the worsening humanitarian situation in Afghanistan, as well as for Afghan refugees in neighbouring Pakistan and Iran. This brings the total EU humanitarian aid for the Afghan crisis to €77 million in 2019.

Asked about the conflict in Kashmir and what the EU does for a peaceful, political solution, the Ambassador notes that regional cooperation in South Asia is now more essential than ever.

“The EU will continue to encourage both Pakistan and India to seek a peaceful and political solution, respectful of the interests of the Kashmiri population on both sides of the Line of Control” she says, adding that this is the only way to solve a long-lasting dispute that for too long has caused instability and insecurity in the region.