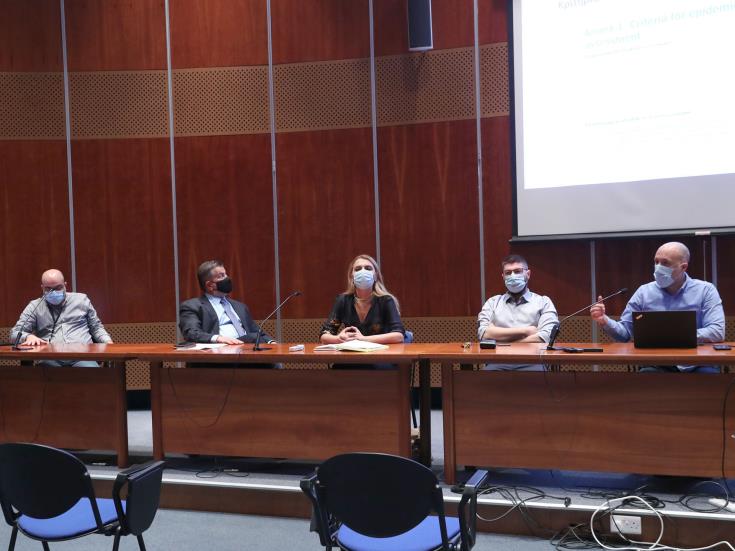 Cyprus is currently in a particularly crucial phase of the pandemic, the members of the scientific advisory committee have said.

Speaking during a press conference on Friday, the scientists said that the indicators show that Cyprus is a country of increased epidemiological risk, therefore the measures announced are targeted and necessary.

Dr. Zoi Dorothea Pana, Dr. Konstantinos Tsiotis, Dr. George Nikolopoulos, Dr. Costas Konstantinou and Professor Leontios Kostrikis called upon the public to comply with the health protocols and emphasised once again the need to wear protective masks and observe social distancing as well as good hygiene, saying that those are the weapons that can lead to good data management of the increased cases that were recorded in the last few days.

They pointed out that only in the last two weeks,1,800 new cases were recorded, of which 1,046 in Limassol. They said that the situation in Cyprus follows the trend that is observed throughout Europe.

Dr. Nikolopoulos said that both morbidity and mortality are a cause for concern and added that the  use of masks seems to reduce the estimated deaths by half in the coming months.

Dr. Konstantinou said that the number of beds and respirators in Cyprus is high and one of the highest in proportion to the population, but noted that the problem is the staff who have to deal with intubations. He said that this is an issue that has to be addressed.

Professor Leontios Kostrikis referred to the methodology of PCR tests that detect the genetic material of the virus, which is time consuming and technically complex. He said that antigen tests are an easy and fast methodology.

Dr. Tsioutis referred to the data for increased transmission in the workplace and reiterated the recommendations on the issue, while Dr Pana spoke about children, noting that studies and data show that children do not become seriously ill and the transmission is low in those of eleven years old and under.

By gavriella
Previous article
UK “welcomes” possibility of five-plus-UN meeting over Cyprus
Next article
‘We’re going to win this race’: Biden predicts victory as his lead over Trump grows