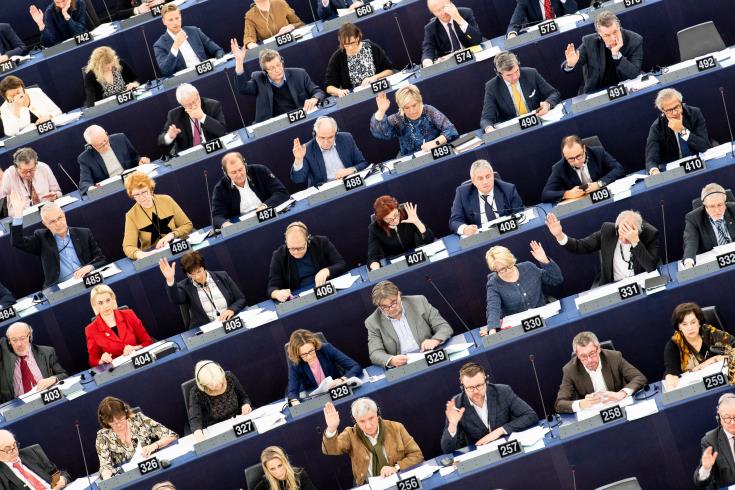 The European Parliament’s Foreign Affairs Committee has called on the European Commission and the European Council to end Turkey’s EU accession process and to instead introduce a special alternative relationship.

A report adopted by 47 votes in favor, 7 against and 10 abstentions,  also calls upon Turkey to withdraw occupation troops from Cyprus, return Famagusta to the UN and refrain from sources of friction with its neighbors including the exclusive economic zone.

More specifically, the final text recommends that the Commission and the Council of the European Union: “in accordance with the Negotiating Framework, formally suspend the accession negotiations with Turkey; remains, however, committed to democratic and political dialogue with Turkey; asks the Commission to use funds available currently allocated under IPA II and the future IPA III to support, through a dedicated envelope directly managed by the EU, Turkey’s civil society, human rights defenders and journalists and to increase opportunities for people to people contacts, academic dialogue, access for Turkish students to European universities and media platforms for journalists with the objective of protecting and promoting democratic values and principles, human rights and the rule of law; without prejudice to article 49 TEU expects the relation between Turkey and the EU to be redefined in terms of an effective partnership. underlines that any political engagement between the EU and Turkey should be built on conditionality provisions concerning respect for democracy, the rule of law and fundamental rights;”

Furthermore “calls on the Commission to include a clause on human rights and fundamental freedoms in the upgraded Customs Union, making human rights and fundamental freedoms a key conditionality; recalls that the current Customs Union does not achieve its full potential when until Turkey fully implements the Additional Protocol towards all Member States;”

The amended report “notes the importance for both the EU, EU Member States and Turkey to maintain close dialogue and cooperation with Turkey on foreign policy and security issues; encourages the cooperation and further alignment o on foreign, defence and security issues, including counter-terrorism cooperation; recalls that Turkey is also a long-standing member of the NATO Alliance and sits at a key geo-strategic location for maintaining regional and European security; notes that the EU and Turkey continue to cooperate on issues of (military) strategic importance within the NATO framework; calls, therefore, on Turkey to resume its cooperation with EU NATO members under NATO’s rolling program of cooperation with non-EU countries;”

The report reiterates “the importance of good neighbourly relations; calls on Turkey, in this connection, to step up efforts to resolve outstanding bilateral issues, including unresolved legal obligations and unsettled disputes with its immediate neighbours over land and maritime borders and airspace, in accordance with the provisions of the UN Charter and with international law; reiterates its call on the Turkish Government to sign and ratify the United Nations Convention on the Law of the Sea (UNCLOS); urges the Turkish Government to end the repeated violations of Greek airspace and territorial waters, and to respect the territorial integrity and sovereignty of all of its neighbours; expresses its regret that the casus belli threat issued by the Turkish Grand National Assembly against Greece has not yet been withdrawn;”

On the Cyprus issue, the amended text welcomes “the efforts by the under the auspices of the UN Secretary General to resume negotiations on the reunification of Cyprus; reiterates its support for a fair, comprehensive and viable settlement based on the basis of a bi-communal, bi-zonal federation with a single international legal personality, single sovereignty and single citizenship with political equality between the two communities, as defined by the relevant UN Security Council resolutions, and in accordance with international law and the EU acquis, and on the basis of respect for the principles on which the Union is founded”.

The report “points to the Framework of the UN Secretary General and his appeal for resuming negotiations, building on the agreements already reached in the 2017 Crans-Montana process” and “asks the EU and its Member States to play a more active role in bringing negotiations to a successful conclusion”.

Reiterates its call on “all parties concerned, in particular Turkey, to commit and contribute to a comprehensive settlement; for calls on Turkey to begin withdrawing its troops from Cyprus, to transfer the sealed-off area of Famagusta to the UN, in accordance with UN Security Council Resolution 550, and to refrain from actions altering the demographic balance on the island through its policy of illegal settlements; stresses the need for the implementation of the EU acquis on the whole island”.

Furthermore acknowledges, in this regard, “the continuation of the work of the bi-communal ad hoc committee on EU preparation; commits to stepping up its efforts to engage with the  Turkish Cypriot community in its preparation to fully integrate into the EU, following the solution of the Cyprus problem, and calls on the Commission to do the same”.

In addition the report “praises the important work of the bicommunal Committee on Missing Persons (CMP, which deals with both Turkish Cypriot and Greek Cypriot missing persons), and commends the fact that improved access to relevant sites, including military areas, has been granted; calls on Turkey to assist the CMP by providing information from its military archives”.

Finally it “recognises the right of the Republic of Cyprus to enter into bilateral agreements concerning its exclusive economic zone; reiterates its call on Turkey to respect fully the sovereign rights of all Member States, including those rights related to the prospecting for and exploitation of natural resources in accordance with the EU acquis and International law; urges Turkey to engage in the peaceful settlement of disputes, and to refrain from any threat or action which might have negative effects on good neighbourly relations”,

The MEPs note that visa liberalisation is “of great importance for Turkish citizens, particularly for students, academics, business representatives and people with family ties in EU Member States” and encourages the Turkish Government “to fully comply with the 72 criteria identified in the visa liberalisation roadmap”, while stressing that the revision of Turkey’s anti-terrorism legislation is “a key condition for ensuring fundamental rights and freedoms” and encourages Turkey to make the necessary efforts to fulfil the remaining benchmarks; stresses that visa liberalisation will be possible once all the criteria have been met in a non-discriminatory way, fully and effectively”.

Finally the report “recalls the importance of the full implementation of the resolution by the Parliamentary Assembly of the Council of Europe on Imbros and Tenedos and calls on Turkey to assist the repatriation of minority families who wish to return to the islands” and “welcomes the opening of the Greek-minority school on the island of Imbros, which constitutes a positive step”.