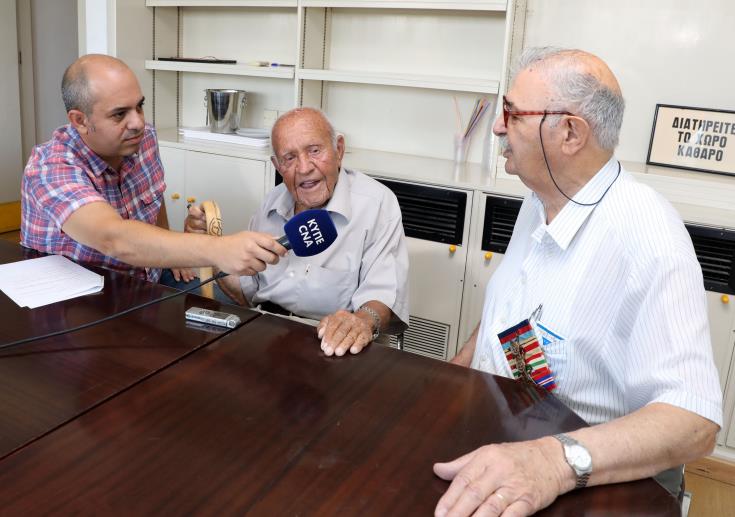 Two Cypriots, both World War II veterans, have met for the first time since the end of the War, in Nicosia, in what was an emotional reunion, full of reminiscences of the past, and talked to the Cyprus News Agency, in great detail, about their war experiences.

They also talked about the future of their common homeland, Cyprus. Both live on either side of the ceasefire line, separating the northern Turkish occupied areas of the Republic from the southern government controlled part of the island.

Greek Cypriot Menelaos Kouzoupis and Turkish Cypriot Kemal Salih (Pilli), both from Paphos joined the British army to fight in the Second World War on the side of the Allies.

When the WW II ended, they returned to Cyprus in the middle of 1946 and since then lost track of each other. Destiny brought them to meet again after more than 70 years and recall everything they lived together in one of the most terrible and horrifying wars humanity has ever known.

The meeting, which was arranged through common friends, took place at the offices of Cyprus Veterans’ Association W.W.II in Nicosia and the camera of Cyprus News Agency (CNA) was there to record everything the two war veterans exchanged, remembering again the deprivations and the hardships of the war.

What is particularly admirable is the fact that despite that both are in their 90s,  time has not faded the images in their minds and their memories remain alive until today, describing with impressive detail what they have experienced since the day of their enrollment and later on in the battlefields fighting for freedom and democracy.

They both recall that their enrolment took place at the festival of Ezousas on June 29, 1944, at the village of Choulou in Paphos, following an appeal published in the local paper inviting the inhabitants of Cyprus, which  at that time was a British Crown colony, to volunteer.

They also remember that they had to walk from their villages to Choulou. Mr. Kouzoupis said that he did not tell his grandfather, with whom he was staying at that time, about his decision to join the British army for fear of not letting him do this because of his young age, since he was only 16.5 years old. He also said that he had to lie to the recruiting office about his real age for fear of being rejected due to his age.

They were transferred to the English camp at Polemidia for training and then to Syria, Palestine and ended up in Italy. Kouzoupis remembers that he shared the same tent with Kemal. He still remembers the number he was given – 21139 – and that of his friend Kemal, which was 21142.

After the Turkish invasion of Cyprus in 1974, Salih had to abandoned his village and today he lives in Ayios Ermolaos village in the Kyrenia district and despite the lapse of seven decades, he still speaks Greek very well.

Both of them were invited to comment on the fact that while they fought together in the Second World War against a common enemy, in 1974 they found themselves in different camps. CNA also asked them about their thoughts regarding the current situation in Cyprus.

This is what they had to say: Salih said that Greek Cypriots and Turkish Cypriots used to live peacefully together, noting that “we were like brothers.” He appeared pessimistic about the prospects of finding a solution to the Cyprus problem to reunite the country and predicted that it would remain unresolved for many years.

Kouzoupis talked about “foreign intervention in 1974 led us to quarrel between us. We did not have any differences between the Greek Cypriots and the Turkish Cypriots. We lived just fine. But foreign intervention forced us to separate into two camps. That is why I believe a solution to the Cyprus issue must be found, even a federal solution, so that we can live together again and the good days come back again.”

Kemal agreed with Kouzoupis, apportioning responsibility for the absence of a solution in Cyprus to the British. “If the British leave and leave us alone, then we will be as we used to before,” he told CNA.

According to the album of Cyprus Veteran’s Association World War II on the occasion of the 50th anniversary of the Allied victory, 30,000 Cypriots from all the communities of Cyprus took part in the war. These include some thousands of Cypriots who lived in various countries abroad. Some 600 soldiers have never returned to Cyprus. Records are available for only 338 people as to the battlefronts where they fell, the dates and the cemeteries where they were buried.