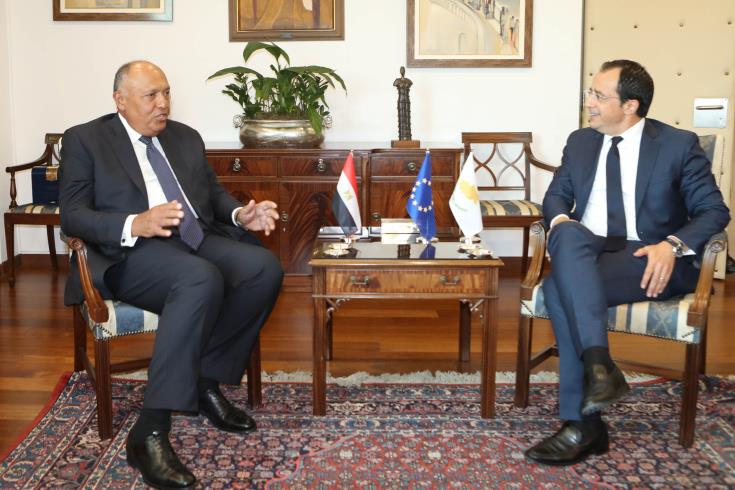 Egyptian and Cypriot Foreign Affairs Ministers Sameh Shoukry and Nikos Christodoulides reconfirmed the importance of continuing coordination between the two countries on regional issues as well as their strong bilateral ties, during a meeting they had in Athens, on Thursday, an Egyptian Foreign Ministry spokesperson has said.

Christodoulides and Shoukry met on the sidelines of a “Philia Forum” hosted by Greece with the participation of Egypt, the United Arab Emirates, Cyprus, Bahrain, Saudi Arabia and France.

In a press release, spokesperson for the Ministry of Foreign Affairs, Ambassador Ahmed Hafez, said that Shoukry and Christodoulides affirmed the excellent and strong bilateral ties in various fields, and the importance of continuing the ongoing coordination between Egypt and Cyprus, especially during the current regional developments.

The two Ministers also noted the importance of hastening the implementation of the projects agreed upon, whether on the bilateral level or in the framework of the tripartite cooperation mechanism with Greece, in accordance with the outcomes of the tripartite summit held in Nicosia in October 2020, thus contributing to further strengthening the existing relations of cooperation between the three countries in the various political and economic fields.

Hafez added that the two Ministers also expressed their satisfaction with the swift ratification by a large number of Member states of the founding charter of the Eastern Mediterranean Gas Forum, and the agreement on its entry into force starting March 2021.

In this regard, Shoukry expressed appreciation for the Cypriot position in support of promoting relations between Egypt and the European Union in various fields.