Egypt supports the right of Cyprus to its EEZ, Egyptian House President stresses 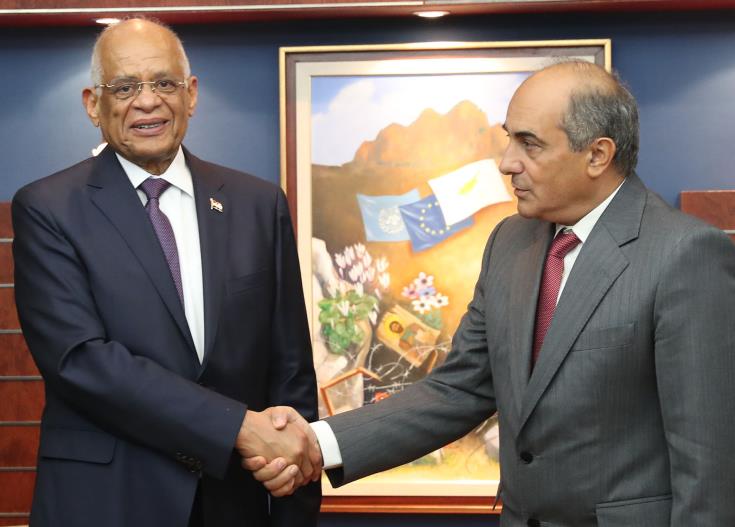 Egypt supports the right of Cyprus to exploit its natural wealth within its Exclusive Economic Zone (EEZ) and also supports a solution of the Cyprus problem in the context of UN resolutions, the President of the Egyptian Parliament Ali Abdel Aal has stressed.

Speaking after the meeting, the Egyptian President initially thanked Syllouris for the warm welcoming and hospitality and referred to his discussion on issues of common interest between the two countries.

As he pointed out, the Mediterranean Sea connects the two countries which should become a Sea of peace, love and cooperation.

The Egyptian House President pointed out that the bilateral relations between the two countries are at a very high level, and noted that the agreed with the President Syllouris to continue to work for further strengthening further of these relations that benefits the people of Egypt and Cyprus.

“As a House of Representatives of Egypt, we expressed our full support to the right of Cyprus to exploit its resources in its EEZ in the Mediterranean. We reaffirmed Egypt`s full support for the efforts made by Cyprus to restore its unity and we condemned any effort made to interfere in the country’s internal affairs. We support a solution to the Cyprus problem based on UN resolutions,” he stated.

Then, he said that during the meeting they discussed issues of the trilateral cooperation between Egypt, Cyprus and Greece, stressing that this cooperation upgrades the presence of the three countries in the region.

He also thanked Syllouris for the Cyprus firm support towards Egypt`s positions in various international forums, and mainly in the European Parliament. “We have discussed and agreed on the continuation of cooperation between our Parliaments in the international parliamentary forum,” he concluded.

Syllouris thanked the Egyptian House President for his statement of support to the position of Cyprus and noted that they stick to their agreement for cooperation and actions that will bring results immediately.

He also referred to three points, upon which he thanked Abdel Aal for the support. Firstly, he thanked him for the determination to work together and to bring about results in the bilateral parliamentary cooperation.

Secondly, he said, the thanked him for his country’s longstanding support to the Cyprus issue and the opposition to Turkey`s intervention in an independent country. Thirdly, he thanked him on the support towards the rights of Cyprus to the island’s EEZ.

Abdel-Aal and the parliamentary delegation also met with the President and the members of the Cyprus-Egypt Group of Friendship at the Cyprus Parliament, Yiorgos Lillikas, Nicos Tornarites, Eleni Stavrou, George Loukaides, Christiana Erotokritou and Angelos Votsis.

During the meeting, the two sides praised the excellent level of bilateral relations between Cyprus and Egypt at all fields and expressed the wish to further deepen those relations.

The President of the Group Yiorgos Lillikas expressed the gratitude of Cyprus towards Egypt for the firm support as regards the Cyprus problem, especially in the framework of the Organisation of the Islamic Cooperation. He added that on the other hand, Cyprus constitute the ambassador of the Egyptian positions in the EU.

Cyprus is currently developing natural resources discovered within its EEZ, while several international companies are involved in hydrocarbon exploration and exploitation activities.