Effort at international level for Cyprus missing persons to be intensified 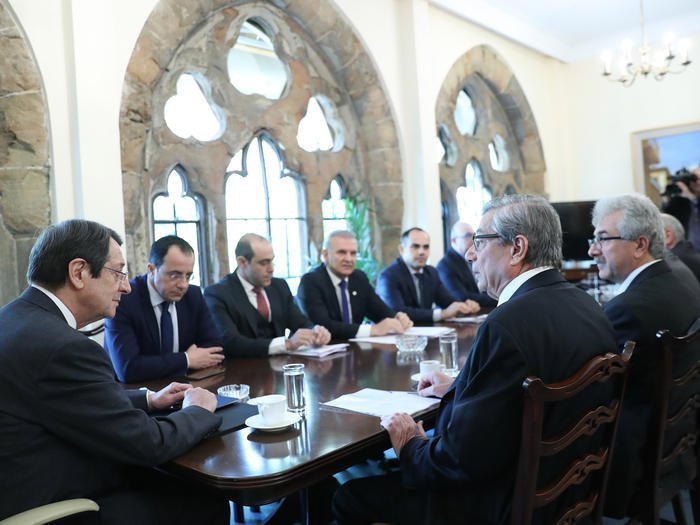 President Nicos Anastasiades and the Pancyprian Organisation of the Relatives of Undeclared Prisoners and Missing Persons discussed on Tuesday, ways to intensify the effort at an international, political and diplomatic level so that Turkey can be pressured to cooperate in the matter of the missing persons in Cyprus.

The meeting was held at the Presidential Palace, in the presence of Foreign Minister Nicos Christodoulides and Commissioner on Humanitarian Issues Photis Photiou.

In statements after the meeting Photiou said  President Anastasiades and the government showed continued interest on the important matter of missing persons in Cyprus.

“We had the opportunity today in the presence of the President and members of the Committee of Missing Persons Relatives, to review the situation until today, see how effective the action plan approved by the Cabinet a few months ago has been,” he said, adding that President Anastasiades has asked that the effort continues both at a political level and at the level of collecting evidence, of researching and evaluating evidence by witnesses who come forward, because as he noted, “time is our greatest enemy.”

Photiou acknowledged that in recent years results have been poor, adding that this is due to Turkey’s lack of cooperation on a humanitarian matter, who does not give information contained in the Turkish army’s archives, necessary for the Committee on Missing Persons (CMP) to locate the remains of missing persons and large mass graves.

He added that on the basis of the action plan in place and what was discussed in today’s meeting efforts will be intensified at a political and diplomatic level, with the EU, the US and the UN so that Turkey can be persuaded to cooperate.

“We will certainly continue the efforts and will enhance all our services so that we can also have better outcomes in the matter of researching and evaluating evidence by witnesses,” he concluded.

On his part, Nicos Sergides, President of the Pancyprian Organisation of the Relatives of Undeclared Prisoners and Missing Persons said that during the meeting they reviewed the current situation in depth.

“We have seen mainly the problems at CMP level and have reflected on the CMP’s poor outcomes and we have discussed possible ways with which to improve the situation as it stands today,” he noted, adding that President Anastasiades and the relevant authorities have said they will go ahead with actions which will have better results.