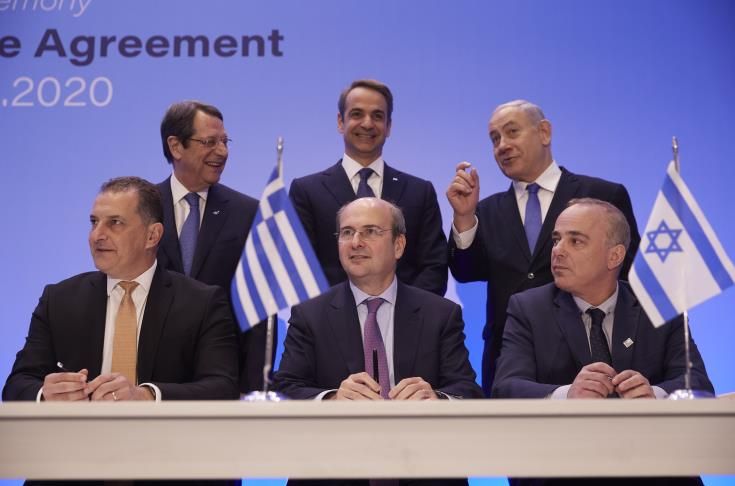 The agreement was signed in the presence of Greece`s and Israel`s Prime Ministers Kyriakos Mitsotakis and Benjamin Netanyahu, and President of the Republic of Cyprus, Nicos Anastasiades.

During the joint press conference that followed the signing of the agreement, President of the Republic of Cyprus Nicos Anastasiades said that the EastMed agreement constitutes a historic milestone, which confirms in the most tangible and convincing way the trilateral cooperation between Greece, Cyprus and Israel, which has matured to the point at which it provides strategic projects with significant geopolitical value.

President Anastasiades underlined that the East Med pipeline entails immense collective benefit both for the contracting states and for the region, as it contributes to the security of energy supply of the European Union. As he said, the geopolitical value of this project is highlighted by EU’s decision to fund technical studies for the construction of the pipeline, and also by the USA that recently adopted the East Med Act.

President of the Republic of Cyprus said that the Greece-Cyprus-Israel cooperation is founded upon the respect of the international law and the shared values of solidarity, reciprocity and sincere dialogue, with a view to promoting peace, stability and security in the turbulent region of the Eastern Mediterranean.

“Today’s signing of the intergovernmental agreement for the construction of East Med pipeline reflects our joint position that the discovery of significant hydrocarbon reserves in the Eastern Mediterranean can strengthen interstate alliances, by multiplying their strategic value”, Anastasiades said. As he added, this position is shared by the regional states that participate in the Eastern Mediterranean Forum – an initiative which is strongly supported both by the European Union and the USA.

President of the Republic of Cyprus underlined that it is very important the fact that despite their differences, the participating states in the East Med Forum have recognized that collective action through the creation of a regional energy alliance, ensures the competitiveness of the Eastern Mediterranean in the global natural gas market, and creates conditions for peace and stability in the region.

Finally, Anastasiades expressed his confidence that the Israel-Cyprus-Greece electricity interconnection –also known as “EuroAsia Interconnector”– will be constructed, according to the existing decisions.

On his part, Greek Prime Minister Kyriakos Mitsotakis said that the East Med pipeline provides peace and cooperation between the regional states, representing the culmination of a new geopolitical relationship. The signing of the agreement has economic, diplomatic, geostrategic and developmental value, Mitsotakis stressed.

“The East Med pipeline constitutes one of the biggest natural gas pipelines, and contributes to the peace and geostrategic stability in the region”, Greek Prime Minister said, while underlining that this project will upgrade Greece’s and Cyprus role in the regional energy supply. Moreover, Mitsotakis reiterated that this agreement does not represent a threat for any country. “This agreement is open to all parties, on the condition that they respect the international law”, he said.

In his statements, Israeli Prime Minister Benjamin Netanyahu said the signing of the East Med agreement represents a historic moment for his country. “I welcome the collaboration with Cyprus and Greece, which strengthens the prospects of security and prosperity in the region. We are not directed against any third country. We are working for the benefit of our people”, Netanyahu stressed. He also explained that Greece, Cyprus and Israel invite all countries to contribute to the project of the East Med pipeline, with particular reference to Italy and Egypt.