Dust levels remain high, due to wane by Thursday afternoon 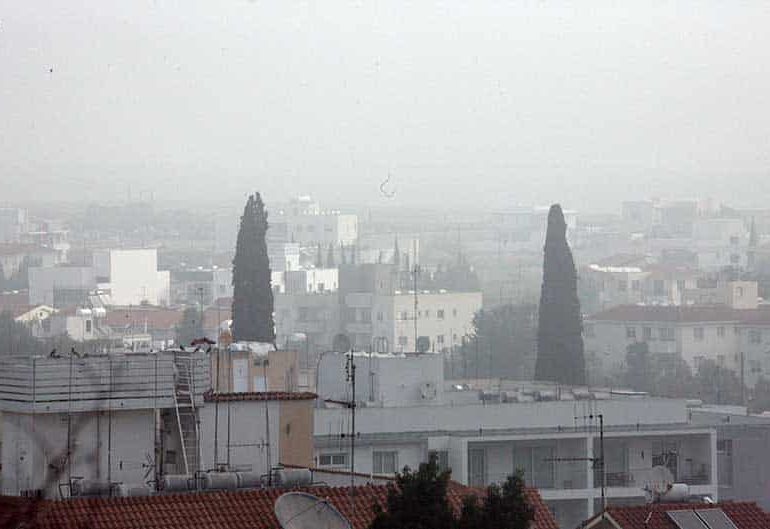 Dust levels in the atmosphere will remain high on Wednesday although lower than the previous days, while the phenomenon is expected to gradually subside as of Thursday.

The Department of Labour Inspection announced that the hourly concentration of respirable particles in ambient air with diameter less than 10 microgrammes (PM10), on Wednesday were between 102 mg/m3 and of 57 mg/m3 (micrograms per cubic meter).

“Consequently, it is expected that the average 24-hour concentration will exceed the corresponding limit value of 50 mg/m3 as defined by the relative legislation,” it said.

On Tuesday, it said, the average 24-hour concentration of respirable particles was between 121 and 254 mg/m3 depending on the location.

According to the met office, dust will persist throughout Wednesday and Thursday morning and it is expected to start waning in the late afternoon tomorrow.

The temperature on Wednesday is expected to be 25 degrees Celsius inland, around 22C in the coastal areas and at 18C in the mountainous areas.

A slight temperature rise is expected on Thursday. Temperatures are expected to drop again on Friday and remain at the same levels throughout Saturday.

Because of the small size of the respirable particles and their negative effect on human health, the public and especially the vulnerable groups of population – children, the elderly and patients –  are advised to avoid going outdoors.

Employers are also urged to take the appropriate measures after assessing the risks that their employees are facing while working in open spaces. Moreover, it is recommended that workers in open spaces use appropriate personal protection gear.

Leading epidemologist Michalis Voniatis has called for all of Wednesday’s Cyprus Cup football matches to be postponed due to the conditions, saying it is extremely dangerous for athletes to compete in such high dust levels.

He added that exercising in such conditions is likely to affect a person’s well-being and can create long-term health problems.

His request was ignored by the Cyprus Football Association with the three games set to take place as scheduled.