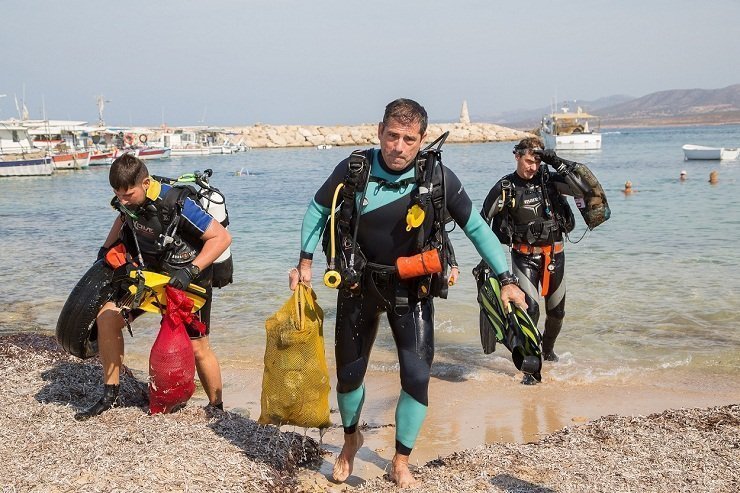 Professional divers in cooperation with AKTI project and research centre and Lanitis Bros  removed a large amount of rubbish from the seabed as part of an ongoing campaign against marine pollution.

The Mediterranean Sea is becoming a dangerous “soup of plastic,” endangering both marine life and the health of humans, AKTI Chairman of Board of Directors, Xenia Loizidou, said.

“Considering that plastic amounts to 95% of marine debris, we can understand that it is a very serious threat. High levels of plastic pollution entail direct dangers for the vulnerable ecosystem of the Mediterranean and for human beings, as it has been established that microplastics have already entered our food chain,” Loizidou said.

Besides cleaning seabeds, Loizidou noted that AKTI and their partners also separate the rubbish to identify their source of origin.

In particular, through the scheme “Responsible Coastal Operations”, AKTI and Coca Cola promote innovative and sustainable practices to be used by businesses which operate on the coastal front of Cyprus. Dozens of cafes, restaurants, kiosks, hotels, supermarkets and beach bars have already volunteered to create a network of environmentally-responsible coastal businesses.

Lanitis Bros offered 2.5% (€5,000) of their revenue from sales of their products in Sklavenitis supermarkets for the seabed cleaning in Akamas.

“Marine plastic pollution is a major issue that should concern all of us. State, society, organisations and each of us individually. We must act immediately and collectively by changing our existing habits. In Lanitis Bros, we recognise the severity of the problem and we have set it as a priority for our environmental and social actions,” Director of Communication and Public Relation of the organisation Kalia Patsia, said.