Developments regarding Cyprus’ energy program expected in next days – FM 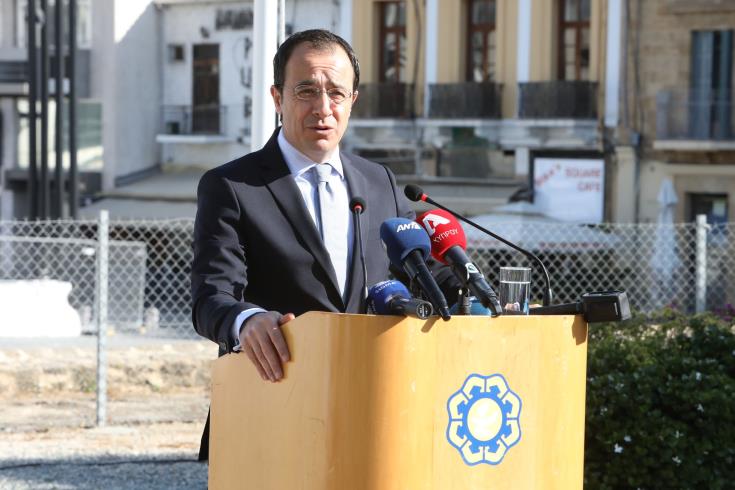 Foreign Minister Nikos Christodoulides said on Thursday that developments should be expected in the next few days, concerning the energy program of the Republic of Cyprus.

Speaking on Wednesday, on the sidelines of an event for Europe Day, in Nicosia, Christodoulides also referred to the Turkish activity in Cyprus’ exclusive economic zone and said that the President Anastasiades will have the chance to discuss with his counterparts the next steps concerning the response of the EU, at the informal European Council, in Romania.

Asked about an international arrest warrant against individuals taking part in Turkish activities off the coast of Cyprus, the Minister said that “we are in the last stage of issuing the first arrest warrants.” “After that, it will be a matter for Justice” he added, noting that all relevant information has been already provided. Christodoulides said he expected the arrest warrants to be issued soon.

On another question, the Minister said he expected supportive statements to continue, both from EU institutions, as well as from member states. At the same time, he added, Nicosia is in contact with neighbouring countries interested in these developments, as well as with countries that have particular interest in the energy developments in the Eastern Mediterranean.

He also referred to the contacts he had on Wednesday in Paris, noting that he had a good discussion with his French counterpart on all these issues. Asked about his contacts with representatives of the French energy giant Total, the Minister of Foreign Affairs said that in the next few days, announcements and developments should be expected concerning the country’s energy program.

Christodoulides said that he can not imagine how Cyprus would address today’s crisis with Turkey in Cyprus’ exclusive economic zone, without EU help.

Moreover, he wondered how Nicosia would cope with various challenges in the past few years without EU help. “For example, I can not imagine how we could address the crisis in 2013 without the EU, I can not imagine today how we can address the crisis with Turkey within our exclusive economic zone without the help of the EU and that of our partners in the EU” he underlined.

The Minister also referred to a series of challenges the Union is facing today, including Brexit, migration and climate change and said that the informal European Council, taking place in Romania, should outline the basis for the future of the Union.

Nicosia believes that all these challenges provide an excellent opportunity to determine the future we wish for, Christodoulides went on, and said that “the Republic of Cyprus will be present in negotiations for more Europe, for more integration within the EU.”

He noted finally the decision to establish a Permanent Secretariat for European Affairs, in order for Cyprus to be more efficient and active within the EU, and have a role during crucial times ahead.

Speaking at the same event, the Mayor of Nicosia Constantinos Yiorkadjis said that Cyprus managed to overcome and address various crises together with the EU, for the benefit of its citizens. Referring to the next European elections, he said that citizens have a chance to choose their representatives who will take decisions, affecting their daily lives.

By In Cyprus
Previous articleMotor vehicles registrations down by 9.4% in the first four months
Next articlePM Tsipras says ‘diplomacy first’ on EEZ Turkey’s illegal activities