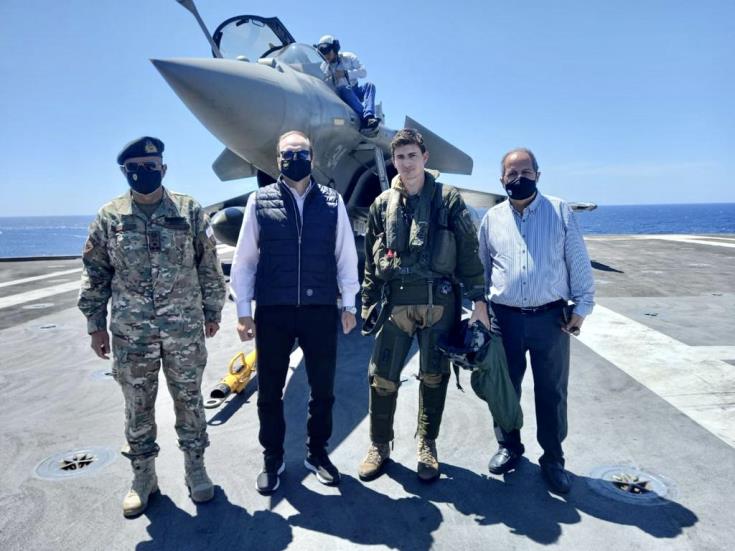 Cyprus Defence Minister Charalambos Petrides has visited the French aircraft carrier “Charles De Gaulle” which is at sea off the coast of Cyprus.

In a written statement, Petrides said on Monday that he was briefed about the mission and more generally the operations that the aircraft carrier conducts in the Eastern Mediterranean region.

He also said that it had docked in Cyprus on May 10-16 for maintenance and support services, after coordination between the Cypriot and the French authorities.

He recalled that last Tuesday an air exercise between the Cypriot National Guard and the French Armed Forces, codenamed “TALOS 2021”, took place adding that other joint military exercises will also be conducted.

Moreover a search and rescue exercise is scheduled to take place on Monday with the participation of aircraft that will take off from “Charles De Gaulle” and Cyprus National Guard aircraft and vessels.

Petrides said that Cyprus` bonds with France are based on common values and a common approach as regards security and prosperity in southeastern Europe.

He noted that Cyprus has become a pillar of stability in the Eastern Mediterranean, though a network of bilateral, trilateral and multilateral cooperation schemes that it has established and which are based on the respect of the international law.

The Minister noted that Cyprus conducts numerous aeronautical exercises in the Eastern Mediterranean region with the French armed forces, in the framework of the security and defence sector and on the basis of a bilateral defence cooperation programme.