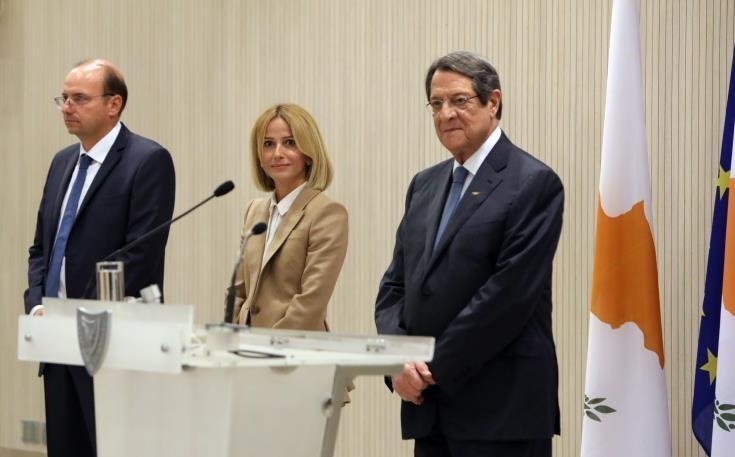 The new Ministers of Defence, Charalambos Petrides, and Justice and Public Order, Emily Yiolitis, as well as new Attorney General, Giorgos Savvides, and Deputy Attorney General, Savvas Angelides, were sworn in on Monday during ceremonies at the Presidential Palace.

Addressing the two new Ministers, President of the Republic Nicos Anastasiades said he chose them for their abilities, qualifications and professionalism, their ethos, honesty and will to serve the country.

Furthermore, the President referred to the work produced so far at the two Ministries, and praised the work of the Ministers who served in his government.

Speaking on behalf of both Ministers, Yiolitis said they were aware of the responsibilities they are taking on and assured that they were both focused on implementing the government programme.

Yiolitis also noted the importance of reforms, which would bear the seal of her predecessors to a great extent.

Addressing the new Attorney General and Deputy Attorney General, President Anastasiades said that the decision to appoint them was based inter alia on their ethos, honesty, discretion, and integrity of the character, their in-depth knowledge and excellent level of legal training, and the many years of experience.

He expressed the conviction that both Savvides and Angelides would meet the high expectations of the President himself and the citizens.

President Anastasiades praised the work of their predecessors and pointed out the importance of the positions they were assuming.

On behalf of both newly appointed top officials of the Law Office, Savvides said they were fully aware of the duty and obligations emanating from their appointment, as well as the expectations the President and society had.

Savvides assured that they would work with all their strength, courage, honesty, determination and unwavering commitment to the Constitution and the laws, to fulfill their mission.