Dear friends Cypriots we will stand by your side, EP President says after devastating fire 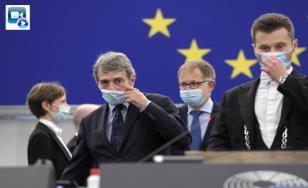 European Parliament President, David Sassoli, has expressed solidarity with Cyprus after the huge devastating fire in the country.

Opening on Monday the EP plenary session, which is taking place in Strasbourg, Sassoli said that “dear friends in Cyprus we will stand by your side.”

We must express our solidarity with the Cypriots, all the people of Cyprus, and the victims of this fire, which resulted in four deaths and huge destruction and pain, he noted.

He said that the fire is now under control and noted the activation of the rescEU by the EU, underlining that it is proven once again that unity creates strength.

“The period of solidarity is not over. Dear friends Cypriots we will stand by your side,” he noted.