Cyprus to use all legal means to stop Turkey disputing its sovereign rights, Defence Minister says 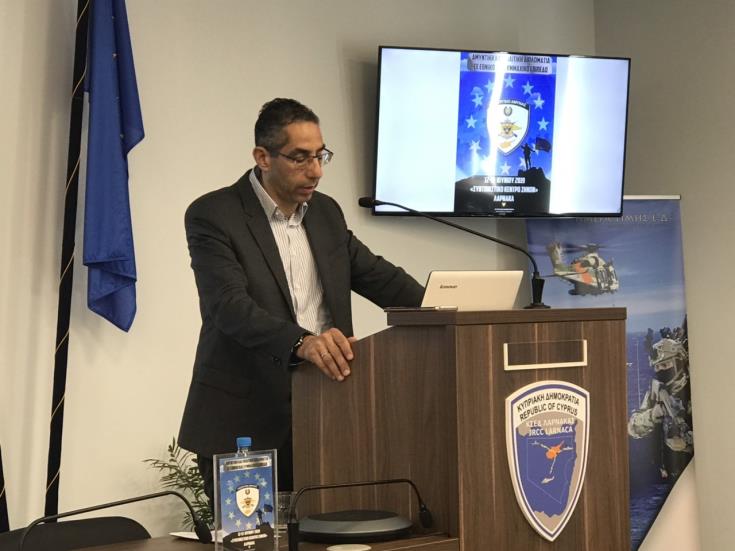 The Republic of Cyprus will make use of all legal means the international law provides and will protest to all international organizations and its strategic partners, in order for Turkey to stop disputing and violating its sovereign rights in its maritime zones, Defence Minister Savvas Angelides said on Wednesday. He added that the aim is to continue as usual with Cyprus’ energy program to serve the country’s interests.

Speaking during a workshop at the JRCC Coordination Center “Zenon”, in the south-eastern coastal city of Larnaca the Minister said that Cyprus sent already the message that it is coordinating its action with Greece, the EU and powerful third countries. “Stern remarks by Greece, the US, France, Russia and Egypt speak for themselves” the Minister added.

He said moreover that Cyprus’ geographical position and its geostrategic value expose the country to challenges throughout its history. Moreover, the important cooperation schemes Cyprus is developing with neighboring countries, such as Egypt, Israel, Jordan and Lebanon, prove that Nicosia may play an important role in connecting the EU with the region, Angelides said.

He also noted that the emergence of new asymmetric threats increases the need for a comprehensive approach to deal with today’s challenges. New types of threats know no national boundaries and they are not easily tackled with conventional means a country has in its disposal, Angelides went on and said that we need to design common defence policy and diplomacy mechanisms to avert dangers.

The Minister of Defence also spoke about the need to prepare, train and operate jointly, in line with the UN Convention on the Law of the Sea, the EU acquis, international treaties and national and EU law.

“It is obvious that the EU has a particular interest for energy developments in the Southeastern Mediterranean, deeming that important discoveries of natural gas deposits in the region are conducive to conditions of the Union’s energy autarky” Angelides noted.

He referred subsequently to the East Med pipeline, noting that the European Commission is financing viability studies for this project of common interest (PCI). The preliminary agreement reached between Cyprus and Israel and Italy and Greece on East Med  is a development with great geostrategic significance, the Minister said.

Energy and the country’s active role in the Eastern Mediterranean’s regional security show Cyprus’ geostrategic value as a bridge between the region and the EU, Angelides went on.

The strategic importance the Republic of Cyprus attributes to hydrocarbons has brought about a change in the country and the region, the Minister added, noting that this was not an easy choice taking into account Cyprus’ limited military capacity. Therefore, trilateral cooperation with Greece and other countries was deemed important and imperative, in order to fill this gap, he said.

According to the Minister of Defence, Cyprus has managed to turn into a pillar of stability in the Eastern Mediterranean through the network of trilateral cooperation schemes and other initiatives, such as Med7, involving a wide range of issues from political to economic cooperation, security culture, innovation and education.

By In Cyprus
Previous articleThousands of Hong Kong protesters gather, govt offices shut after violence
Next articleCheques not as popular with Cypriots