Cyprus talks must continue on the basis of UNSC resolutions, Lavrov says 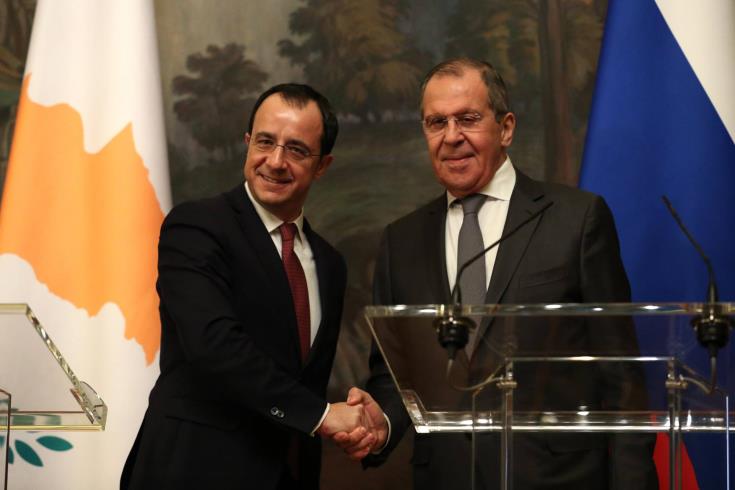 Russian Foreign Minister, Sergey Lavrov, said on Friday that the current system of foreign guarantees in Cyprus is anachronistic and does not respond to the reality any longer, adding that bicommunal negotiations for a Cyprus settlement must continue on the basis of the existing UN Security Council resolutions, and that any possible changes should be decided by the Security Council.

In statements in Moscow with his Cypriot counterpart, Nikos Christodoulides, who paid a one-day working visit to the Russian capital, at Lavrov’s invitation, the Russian Foreign Minister also noted, speaking through an interpreter, that for the time being Russia does not see any need for making changes to the mission of the UN peacekeeping force in Cyprus, expressing the belief that guarantees on behalf of the UN Security Council will be a precondition for safeguarding the independence and the territorial integrity of Cyprus.

“We are in favour of a just, stable, viable and comprehensive settlement of the Cyprus problem,” Lavrov underlined and  noted that Cyprus is an important partner of Russia in Europe. Our multidimensional cooperation is based on traditional friendship ties and mutual affection, on cultural affinity, and serves the goals of security and stability in the Eastern Mediterranean and the European continent in general, he added.

Lavrov also said that he accepts with pleasure an invitation extended to him by Christodoulides to visit Cyprus.

On his part, the Cypriot Foreign Minister noted that he expressed the satisfaction of the Republic of Cyprus for the longstanding stance of the Russian Federation on the Cyprus problem, especially in the framework of the UN Security Council, for Russia’s clear position in favour of the abolishment of the 1960 anachronistic system of guarantees and of any intervention rights, as well as for the need for the unhindered continuation of the UN peacekeeping force presence in Cyprus as long as the current, unacceptable state of affairs continues.

Christodoulides said that he briefed Lavrov on the latest developments in the Cyprus problem, “our general approach” and conveyed “the readiness of our side, of President Nicos Anastasiades, for the talks to continue from the point they were suspended in Crans Montana, with the sole and non-negotiable aim being to achieve a settlement on the basis of the UN relevant resolutions, the European law, the EU principles and values.”

In this framework I asked for Lavrov’s contribution with a view to achieve this goal, he noted.

Christodoulides also said that the two countries’ bilateral relations are at a very satisfying level. He noted that they had the opportunity to discuss specifically about the prospects to further develop them and that they jointly agreed to work together, undertaking concrete actions, with a view to achieve this goal, on a number of issues of mutual interest.

In his statements Lavrov said that they had comprehensive talks during which they attributed great importance to the Cyprus problem. Moreover he said that they thoroughly discussed about a broad spectrum of issues on the bilateral agenda and gave emphasis on the issues agreed during the visit which President Anastasiades paid to Russia a year ago.

He said that they acknowledged with satisfaction the positive dynamic in the basic fields of cooperation, in the humanitarian, cultural and other fields, and that they agreed to continue the implementation of the legal framework of this cooperation.

Moreover he said that they exchanged views on the relations between Russia and the EU, noting that Russia values the constructive position of Cyprus on this issue, as well as its stance on the issue regarding Russia and the Council of Europe.

As regards the situation in Syria and Ukraine, he said that “we reaffirmed our stance for the settlement of both crises on the basis of the UN Security Council decisions.”

Christodoulides thanked Lavrov for his invitation to visit Moscow, noting that this is the second time in ten months that he is visiting the Russian capital.

He said that they had the opportunity to have a frank and open dialogue, during which they had a constructive, interesting, substantial and useful discussion and exchange of views on the two countries’ bilateral relations, international and regional issues, the EU-Russia relations and the Cyprus problem.

Referring to the EU-Russia relations, he said that there are challenges and difficulties, but at the same time it is of decisive importance for the dialogue and the exchange of views to continue, with a view to see how prospects for normalizing these relations can be created, “and how we can cooperate to address the various international problems and promote common objectives.”

He expressed the belief that dialogue is the only way to address any disagreements or different approaches in the relation between the EU and the Russian Federation, which, as he noted has a strategic importance.

Moreover he said that they discussed about regional and international developments and the broader geopolitical situation in the Eastern Mediterranean.

He noted that Lavrov briefed him on the latest developments in Syria and stressed that the Republic of Cyprus is following developments in Syria very closely and is particularly concerned with the continuation of the crisis. Cyprus supports the unity and territorial integrity of Syria and we believe that a settlement can be found only through political dialogue, Christodoulides said.

The Cypriot FM described the results of his visit to Moscow as particularly important and said that he looks forward in welcoming Lavrov to Cyprus.

By In Cyprus
Previous articlePolice looking for two people in connection with robbery (pictures)
Next articleCorbyn could win back Scotland with 2nd Brexit vote, says ex-PM Blair