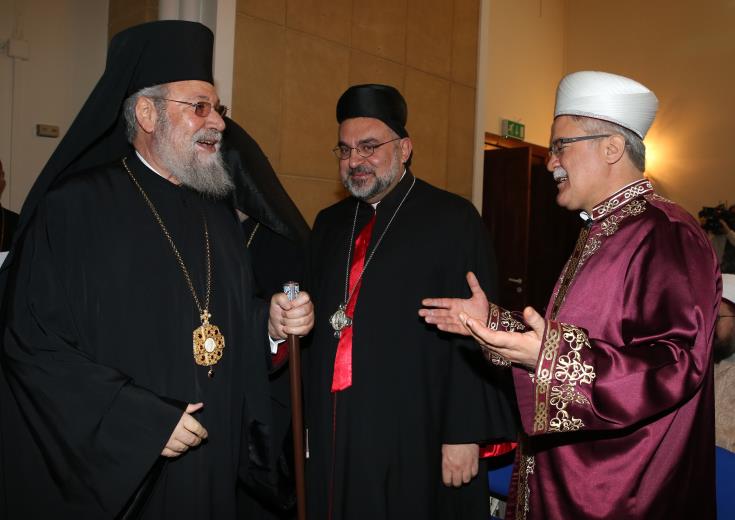 To mark World Refugee Day 2018, the religious leaders of Cyprus have jointly issued a welcoming video statement that advocates inclusion, understanding, and support for refugees and asylum seekers in Cyprus.

According to a press release, the Office of the Religious Track of the Cyprus Peace Process (RTYCPP) has facilitated the video production in cooperation with the Religious Leaders of Cyprus and UNHCR – Cyprus.

“In anxious times such as the one we are living in today, enhanced partnership is essential not only between the United Nations and faith-based actors, but also among these organizations themselves, in building welcoming, tolerant and inclusive communities based on the common values of caring and respect for the stranger,” said Damtew Dessalegne, the UNHCR Representative in Cyprus.

“With this powerful joint statement by the five main religious leaders of Cyprus, we indeed see the start of a strong interreligious
dialogue related to refugee protection in Cyprus,“ he added.

According to the press release, their combined statement has formulated a comprehensive narrative that draws attention to the challenges faced by refugees throughout their journeys. Calling on the state and individuals alike, they emphasize the moral teachings of their respective faith tradition. They advocate for society as a whole to accept the refugees that come to Cyprus, to treat them with respect and to help them rebuild their lives.

“The inspirational words of this joint statement send a clear message that both the Christian and Muslim Religious Leaders of Cyprus stand together with refugees and urge all Cypriots to do the same,” said Salpy Eskidjian, Executive Director of the Office of RTCYPP.

A common theme throughout is the importance of welcoming refugees into Cypriot  society, as seen in the following insightful remarks, the press release noted.

Archbishop Chrysostomos sends a global message for “everyone to devote particular attention to refugees who are forced to flee their homeland, their homes, for a better life.” Further strengthened his appeal to policy makers is “to help solve the problems of the refugees and for the Mediterranean Sea to stop being a graveyard of innocent people.”

Mufti of Cyprus Talip Atalay states that, “all segments of the civil society should make efforts and conduct activities in order to lay the groundwork and a prepare a path for integrating the refugees into the society they live in and for encouraging them to
bring a positive contribution.”

Archbishop Khoren Doghramadjian of the Armenian Apostolic Orthodox Church of Cyprus recognizes that “We usually try not to think about them [refugees], but this is not right. Religions teach us to love each other, and we should extend this love equally
to our fellow human beings and to help them.” He suggests to, “restore their dignity as human beings, to free them from their mind-set as refugees and to enable them to adapt to life in a strange land.”

Archbishop Youssef Soueif of the Maronite Church of Cyprus calls on all actors within society to help refugees by saying, “We should all try as individuals, as institutions, religious institutions, civil institutions, political institutions, we should try to
help them [refugees] to be integrated in to their new societies.”

Rev Jerzy Kraj of the Latin Patriarchal Vicar recognizes that refugees are simply, “our brothers and sisters in search of a better life far away from war, poverty and hunger.” His prayers go out “to those that have devoted their lives and their efforts to helping.”

Embracing the words and actions of the Religious Leaders of Cyprus, Elizabeth Spehar, Special Representative of the Secretary-General and Head of UNFICYP, echoed their sentiments, stating that “despite the current challenging environment, it is incumbent
upon all of us to ensure that the needs of those seeking refuge from conflict are evaluated with empathy, that they receive a fair hearing and a chance to be productive members of an inclusive community.”

She continued in praise of their efforts, underscoring that, “through their strong and compassionate joint statement, the five main religious leaders of Cyprus have lent their influential voices to support refugees in Cyprus and, more broadly, to the global quest of the conflict-affected for a better life.”