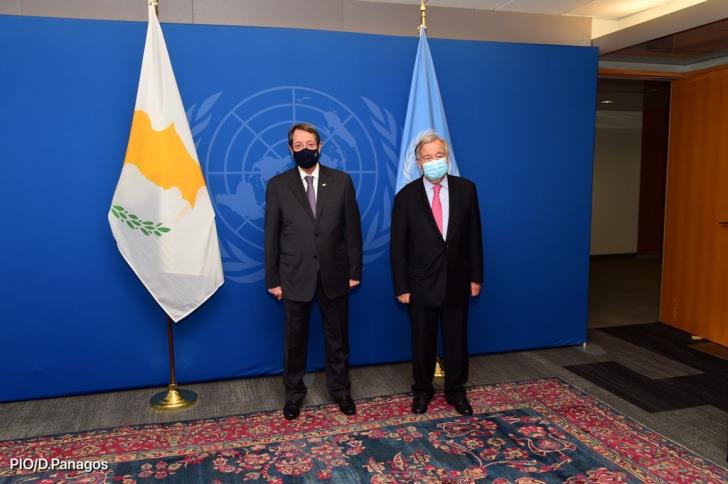 President Nicos Anastasiades presented to UN chief Antonio Guterres “some views and ideas” on the Cyprus issue during their tete-a-tete meeting in New York late on Tuesday.

The aim is for a creative dialogue without prerequisites on how to reunite the divided island gets to be restarted, the President also told journalists at the world organization.

The meeting, held at the Office of the Secretary General, lasted about 20 minutes.

“We have listed views, ideas on how a creative dialogue without prerequisites can be restarted. I have presented some views and ideas and we have agreed that everything related to the Cyprus issue will also be discussed during the lunch we will have on (Monday) the 27th, with (Turkish Cypriot leader) Mr. Tatar,” Anastasiades also said.

“Let us hope that everything will go smoothly, so that there is a new outlook for Cyprus,” he added.

The meeting was also attended by the Minister of Foreign Affairs Nikos Christodoulides and  Government Spokesman Marios Pelekanos.

As well as Permanent Representative of the Republic to the United Nations  Andreas Hadjichrysanthou and Member of the Diplomatic Office of the President Pantelis Pantelides.

Cyprus has been divided since 1974, when Turkish troops invaded and occupied 37% of its territory. Numerous UN-brokered talks aiming to reunite the island have failed to yield results.