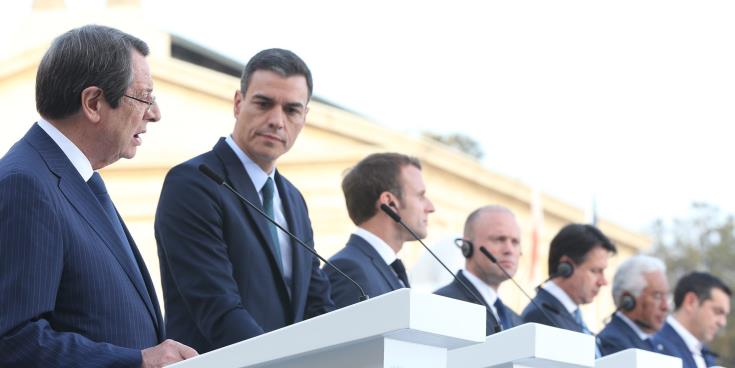 Cyprus President Nicos Anatasiades has expressed his satisfaction over the strong solidarity he received from his counterparts over Turkey’s illegal actions within Cyprus’ Exclusive Economic Zone (EEZ) from the EU’s southern member states, at a MED7 Summit, which took place in Valletta, on Friday.

President Anastasiades was replying to a question by Reuters regarding the situation with Turkey, after the joint press conference the MED7 heads of government and state gave.

“It is about the violations of international law and the Treaty of the Law of the Sea by the invasion, actually, of Turkey in our own Exclusive Economic Zone (EEZ) in an effort to drill within the area,” he said.

So, he added, “this is a threat against peace and this is what we are trying to avoid.”

“We don’t want a crisis,” he stressed, adding that “the international law is there, it is quite clear so nobody could violate by using force, violate the sovereign rights of another country.”

This, he noted, “is what I actually said and I am quite pleased and happy because Cyprus has received such a strong solidarity by our partners but a strong message to Turkey as well.”

Replying to a question as to what his desire is for the future, he said: “to live in peace, to find a solution in Cyprus and to normalize the relations with Turkey.”

Turkey, once again is violating the rules of the EU, he recalled, pointing out that “they are not recognizing Cyprus and it is a candidate member state so it doesn’t comply with the requirements the EU is asking for.”