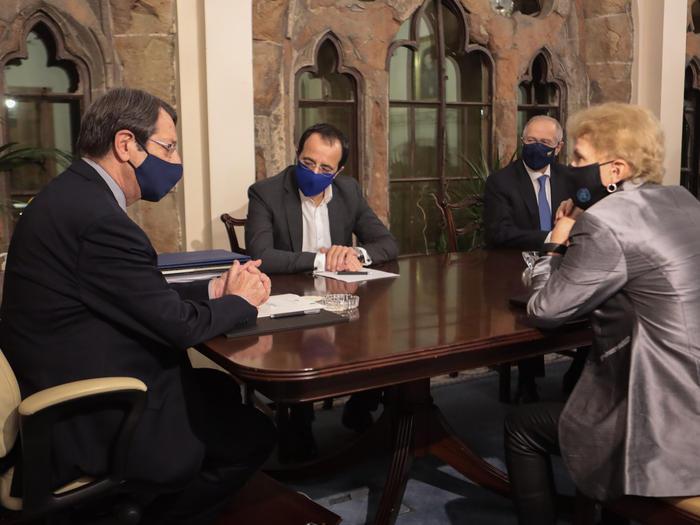 President Nicos Anastasiades has expressed the readiness and determination of the Greek Cypriot side to attend an informal UN-brokered meeting on Cyprus aiming towards the divided island’s reunification.

The President held talks in Nicosia late on Tuesday with UN special envoy Jane Holl Lute who flew to Athens after that for meetings with Greek officials.

“The President of the Republic informed Lute about the readiness and determination of our side to attend an informal meeting, which will be convened by the UN Secretary-General, within his mandate, as defined by the UN Security Council,” Government Spokesman Kyriacos Koushos said after the meeting.

“The President has reiterated and confirmed the positions of the Greek Cypriot side in relation to a Cyprus settlement and expressed readiness for the talks to continue from the point they were left off, at Crans Montana,” he added.

Lute will continue her contacts with the rest of the parties involved and she will inform, subsequently, the UN Secretary-General, Koushos also said.

The latest UN backed round of talks took place in 2017, in the Swiss resort of Crans Montana, but failed to yield any results.

By Annie Charalambous
Previous articleMostly cloudy on Wednesday, possible snowfall on Troodos mountain
Next articleLatest on worldwide spread of the coronavirus