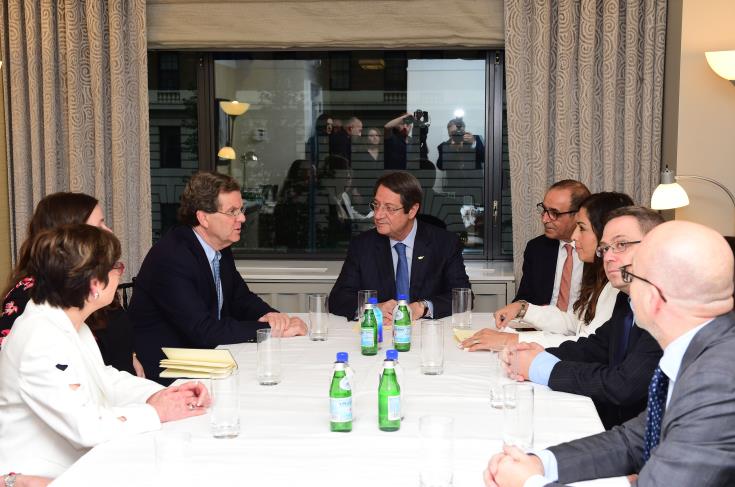 Cyprus President Nicos Anastasiades briefed on Sunday members of the American-Jewish Committee (AJC) about the latest developments in the Cyprus problem.

According to a PIO press release, Government Spokesman, Prodromos Prodromou said that Anastasiades, who is in New York to participate in the 74th Session of the UN General Assembly, met with AJC CEO David Harris and his aides, with whom he also discussed about the constantly developing relations between Cyprus and Israel. Moreover, he briefed them on the trilateral cooperation among Cyprus, Greece and Israel.

Prodromou said that the meeting was quite important as the Committee is one of the most significant organizations of the Jewish lobby in the US and has a long-standing relationship with the Republic of Cyprus.

He added that President Anastasiades informed the AJC delegation about the latest developments in the Cyprus problem and the efforts he has been making as well as the support that Cyprus is expecting to have from its friends.

The continuously developing relations between Cyprus and Israel were also discussed, he added.

Prodromou said that “we expect that the Committee will in its own way contribute, as Mr. Harris has said to the efforts for developing the relations with Israel, for stability in our region, and therefore for ceasing Turkey’s threats and violations.” According to the Spokesman Harris was informed and spoke about these violations, “which they condemn”.

Turkey issued a navigational telex (navtex), announcing its intention to start drilling off Cyprus and the Turkish drill ship “Fatih” anchored since May 4, 2019, 36 nautical miles west of Akamas peninsula. The area falls within the Exclusive Economic Zone (EEZ) and continental shelf of the Republic of Cyprus. Ankara extended the navtex until November 1, 2019. A second Turkish drill ship, “Yavuz”, was anchored off the island’s north-eastern coast since July 8, operating within the territorial waters of the Republic of Cyprus. The ship withdrew to Turkish territorial waters on September 17.