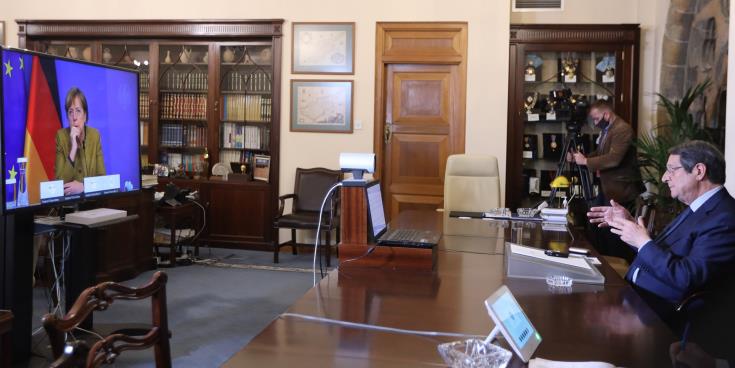 President Nicos Anastasiades has asked German Chancellor Angela Merkel to convey to Ankara to stay away from any provocations and avoid any activities that could influence the status quo of the ghost town of Famagusta in the Turkish-held north.

In statements after a teleconference with Merkel on Thursday evening, the President said: “I have asked her to convey to the Turkish President with whom she will speak on Friday, via a teleconference, that Turkey must stay away from any provocations, must avoid anything that can affect the status quo of Famagusta.”

He added: “At the same time if Turkey wants a positive agenda then it needs to create the conditions that would not ignore any member state and more importantly it must at last take measures on the issue of refugee flows in order to stop them and have a significant improvement as regards this situation.”

Anastasiades also said that Merkel expressed readiness to play a role in these peace process in order to avoid any provocative actions by Turkey and was eager to contribute so that the EU will be present.

But to also provide any other help it can at the legal or other level, so that the pursued settlement of the Cyprus problem will be the desired one, he added.

In addition, the President also said he had the opportunity to reiterate his determination to be sufficiently creative during his presence at the informal five-party meeting on Cyprus, insisting that the settlement cannot derogate from the parameters of the UN resolutions and cannot violate the EU acquis.

“As I explained we are and we will remain an EU country and this is why we are asking for the EU`s contribution so that with its presence it will secure that what is agreed is compatible with the EU acquis,” he added.

Anastasiades also said that he and Merkel discussed about the European Council meeting that will take place on March 25-26, during which the migration issue will be discussed, recalling that refugee flows from Turkey have a significant impact on the population composition of the  Republic of Cyprus and especially of the Greek Cypriot community.

The latest round of negotiations, in July 2017, at the Swiss resort of Crans-Montana, ended inconclusively. The UN Secretary-General invited all parties involved to attend an informal five-plus-one meeting on the Cyprus issue in Geneva, Switzerland, from April 27 to 29.