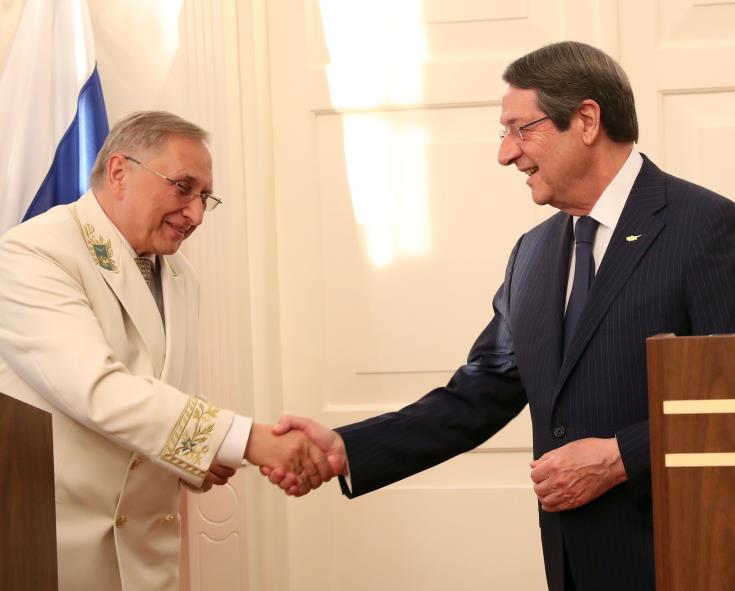 The Republic of Cyprus, as the officially recognised state by the international community, possesses sovereign rights to its Exclusive Economic Zone (EEZ), Russian Ambassador in Nicosia Stanislav Osadchiy has said.

Osadchiy was addressing a reception held at the embassy on the occasion of the Russian Federation’s National Day.

“We are closely monitoring the development of energy programs in the Eastern Mediterranean,” he noted.

According to the Russian Ambassador “we proceed from the fact that drillings can be performed by any state within its own exclusive economic zone in accordance with the norms of international law.”

“It is fully applicable to the Republic of Cyprus, which is a state officially recognized by the international community and, in accordance with the international law, possesses sovereign rights to its Exclusive Economic Zone,” he added.

“The friendly nature of bilateral relations is reflected in our coinciding or close positions on major international issues as well as in Russia’s consistent and significant support to a just, viable and comprehensive settlement of the Cyprus problem, based on the respective resolutions of the UN Security Council,” Osadchiy said.

Referring to the ties between the two countries Russia’s Ambassador in Nicosia spoke of a steadily developed multifaceted political dialogue between Moscow and Nicosia, the legal basis of which is being strengthened and adding that the two countries are major investors in each other’s economies.

Russia, he said, is the second country by the number of tourists visiting the island.

At the same time, he noted, “multilateral contacts firmly connect our peoples in the spheres of culture, economy, innovation, science, education, in relations between twinned cities and in everyday human communication between our citizens who have strong sympathy for each other”.

“Recently” Osadchiy said “during open and frank conversation between Russian President Vladimir Putin and President of Cyprus Nicos Anastasiades in Beijing, both leaders reaffirmed the intention to maintain and develop friendly and partnership relations between two states.”

The Russian Ambassador also cited a Russian proverb according to which “you learn who your true friend is only when you are in need”, recalling that “in times of crisis in Cyprus’ economy, it was Moscow who first gave its shoulder to Nicosia by providing a big loan and later prolonged the terms of its repayment and lowered the interest rate.”

On his part, Cyprus President expressed “the sincere appreciation of the Government on Russia’s full solidarity on this critical matter and the strong support to the Republic of Cyprus exercising its sovereign rights to explore, exploit and develop its natural resources within its Exclusive Economic Zone.”

He also conveyed the gratitude of the people of Cyprus for Russia’s “principled position on the Cyprus Problem and the long-standing support to reach a viable and functional settlement, in line with the relevant UN Security Council Resolutions and EU values and principles.”

“We also vastly appreciate your country’s firm support to UNFICYP’s mandate and we have no doubt, particularly in view of recent provocations in the area of Denia, that you will continue advancing the position of neither altering its mandate nor down-sizing its personnel,” President Anastasiades said.

“During my recent meeting with President Putin”, he noted, “I had the opportunity to thoroughly brief him on the latest developments on the Cyprus Problem and the efforts of the Special Envoy of the UN Secretary-General aimed at resuming the negotiating process”.

At the same time, he added, “I once again reiterated my strong commitment to continue working with determination in order to reach a viable comprehensive settlement that will reunite Cyprus as a truly independent and modern state, free of any foreign dependencies, for the benefit of our people and the future generations.”

“Unfortunately”, Cyprus’ President pointed out, “Turkey’s illegal actions within our Exclusive Economic Zone, in violation of International and EU law, do not create a climate conducive to engaging in a new round of talks.”

He also noted that such actions endanger security and stability in the Eastern Mediterranean, which is an already highly volatile region.

President Anastasiades also spoke of an important pillar of the relationship between Cyprus and Russia “which demonstrates the quality and depth of our relations: The economic cooperation, business and investments collaborations which are supported and promoted in a systematic manner, always in line with international standards and obligations.”

On behalf of the government, he said, “I wish to convey in the strongest terms that the business community of the Russian Federation, either in Cyprus or abroad, can rest assured that Cyprus will remain a reliable partner and further advance its position as a significant international hub for Russian and Cypriot business and investment synergies.”

He further informed that during his meeting with Russia’s President in Beijing “it was reaffirmed that our goal remains none other than to explore new areas of beneficial cooperation, as well as enhance existing collaborations.”