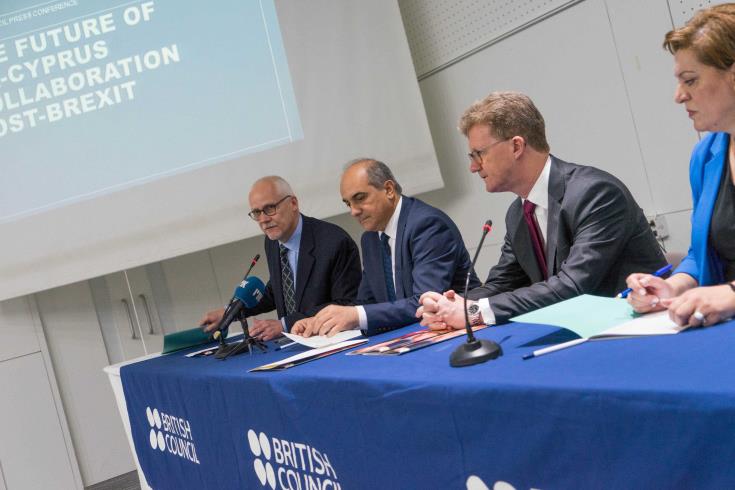 President of the House of Representatives Demetris Syllouris underlined the significance that Cyprus attaches to its higher education sector in general and to developing further the already close educational ties and collaboration with the UK, in particular.

Addressing a conference by the British Council to present the findings of the Higher Education and Research Forum: “The future of UK-Cyprus collaboration post-Brexit”, in February, he also said that Parliament is fully aware of the importance of the education sector for the local economy and in particular of the opportunities that it provides for a move away from a service-based approach, towards a research and innovation focused model.

At the same time, the House of Representatives, he said, aims at ensuring that citizens continue to enjoy the benefits and opportunities of a close relationship between the UK and Cyprus, despite the uncertainty brought about by Brexit.

Throughout the Brexit negotiations, said Syllouris, “Cyprus has followed a constructive approach, aiming to ensure that ties and collaboration between the UK and its EU partners shall continue to grow, albeit on a different basis”.

He also said that the House succeeded in amending the relevant legislation, governing transnational education (TNE) and cross-border collaborative arrangements (franchises) with foreign universities to avoid the creation of legal gaps and prevent vagueness or uneasiness as the UK prepares to leave the EU.

Furthermore, he said the Association of Commonwealth Universities (ACU) has decided to set up an office in Cyprus, their first office outside the UK, to bring about significant benefits and opportunities not only for ACU members but for all higher education institutions in Cyprus.

Concluding, he said through collective action both countries can successfully face any challenge and move ahead towards the establishment of a dynamic and vibrant educational and research environment, that benefits not only institutions and the economy but most importantly students and society as a whole.

He said “the reality is when it comes to education links between Cyprus and the UK, we have very strong foundations, very deep roots and natural complementarity is based on the desire of both Cypriots and British people for very high-quality education delivered through the medium of the English language”.

Whatever happens with Brexit, he added, the traditional links in complementarity between Britain and Cyprus will remain also within the framework of the Commonwealth, adding that there is a lot more “that we can do in the future to exploit the potential of the Commonwealth for education links”.

Cyprus, he added, is really developing its role in transnational education, being driven forward by the growth of the private higher education sector and referred to “excellent existing partnerships”, as he said, between UCLAN in Pyla and St. George’s medical school of the University of Nicosia.

“We have plans to set up a veterinary school in the University of Nicosia in collaboration with the Royal Veterinary College of the UK, delivering UK qualifications. That will grow in the future”, he revealed.

Through TNE, British education can respond to the needs of the priority sectors of the Cypriot economy, tourism, energy, food construction, shipping industry.

Lillie praised the work the House President does to “to ensure that we continue to have a strong legislative and regulatory framework for transnational education post Brexit”.

The British High Commissioner further underlined that “we have always been clear in the UK, we are not leaving Europe, we will continue to have a close partnership between Britain and Europe”.

Among the findings is that the UK is very much a destination for Cypriots and as such there is a desire to maintain that collaboration going forward. He also said that despite the current political uncertainty, there are a lot of opportunities, particularly in transnational education and is increasing from both local and international students, adding Cyprus’ ambition to become a higher education hub further broadens the scope for transnational education opportunities.

As far as research is concerned, he said, there are a number of non-EU funded sources of funding and that can be tapped into “so we do not have to rely entirely on the EU as a source of funding for research”.

The Forum, she said, was very helpful and served to confirm that the UK is very popular educational destination, and one of our targets is to offer the best information to our students and people that are interested to cooperate with the UK.

Noting that the Ministry intends to maintain the historical relations with the UK, she added that despite the uncertainty due to Brexit, we are trying to find specific ways to remain in spectrum of cooperation with the UK.

By In Cyprus
Previous articlePaphos baby death: Court lifts charges against mother
Next articlePrices rose by 32.8% since 2000 – Statistical Service