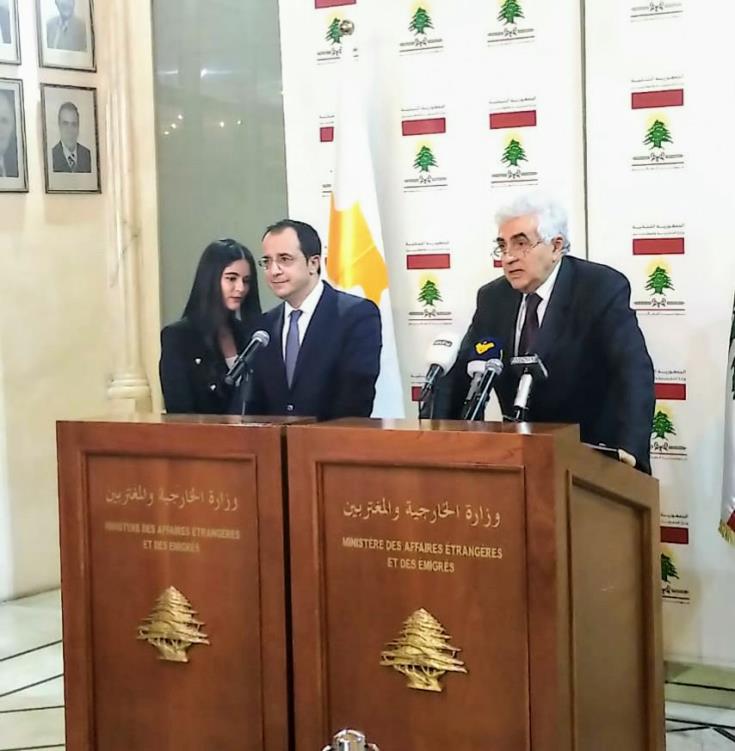 Cyprus Foreign Minister Nicos Christodoulides announced on Friday that Cyprus and Lebanon have started preparations for the first Trilateral Summit at the level of Heads of State / Government, to be held in Nicosia in the spring.

At the same time, he said Cyprus will always be a strong supporter of Lebanon’s stability, sovereignty, security and prosperity.

In remarks after his meeting with Minister of Foreign Affairs and Emigrants of the Lebanese Republic, Nassif Hitti, Christodoulides expressed sincere appreciation for the very positive and open deliberations the two held, noting that he is privileged to be the first foreign dignitary to visit Beirut after the formation of the new Government.
The two, he said, had a frank and open discussion with Nassif on the latest regional developments.

He reaffirmed the joint commitment to further advance the traditionally excellent relations and cooperation between Cyprus and Lebanon, adding “I am convinced that the future of our bilateral relations is indeed very promising, contributing positively to the enhancement of stability, cooperation, security and peace in our region”.

He welcomed the formation of a Government in Lebanon, at a time when the country is at a critical crossroads, faced with a number of challenges. “I was pleased to hear from the Minister, that the Government is determined to move rapidly forward with the necessary reforms, living up to the aspirations and expectations of the Lebanese people”.

Cyprus, he added, will always be a strong supporter of Lebanon’s stability, sovereignty, security and prosperity. “My presence here today, less than a year after my previous visit, serves as proof of our sincere interest and unwavering willingness to continue to support, and work together with Lebanon, in every way possible,” he said.

The two ministers reviewed “the full spectrum of our flourishing bilateral relations, discussing concrete ways of enhancing existing cooperation and expanding it to new fields, for the mutual benefit of our peoples and our region in general,”  said Christodoulides.

Regarding energy, the minister said cooperation in the field of energy between Cyprus and Lebanon is of particular importance. The geographical proximity of the countries, “our  joint commitment to international law and the UN Convention of the Law of the Sea to which both Cyprus and Lebanon are Parties, the Agreement on the Delimitation of the Exclusive Economic Zone, signed between Cyprus and Lebanon, and the fact that some of the biggest energy companies of the world are operating in both the maritime zones of Lebanon and Cyprus, provide for a solid basis for enhancing our cooperation in the energy sector by creating synergies for the benefit of our countries and peoples”.

The Cypriot minister remarked that in this part of the world, “that is no stranger to turbulence and uncertainty, the rapid developments of the last few weeks have once more brought home the message of how necessary dialogue, cooperation and a positive agenda are, all the more in times like these”.

Christodoulides reminded that during his last visit to Beirut, the first trilateral meeting with Lebanon and Greece, at the level of Foreign Ministers was held. “Today, I am very pleased to announce that we have started preparations for the first Trilateral Summit at the level of Heads of State / Government, to be held in Nicosia in the spring of this year, demonstrating our determination to continue to build on the path of respect and cooperation with our neighbours, in a region where this is often not the norm”.

Our vision, he added, “is that mini-lateral cooperation mechanisms such as this one, will lay the ground for the establishment of a result-oriented regional platform, that will in turn have a tangible and positive impact on the lives of our citizens and will eventually allow all countries of our region to work together to tackle challenges and utilize the untapped potential”.

Christodoulides also briefed his counterpart on the EU-Lebanon relations and reiterated that the EU is determined to continue working towards the further enhancement and strengthening of these ties, to our common benefit.  “I wish to emphasize that Cyprus will continue, also within the EU, to be a strong advocate for Lebanon, and its people”.

By In Cyprus
Previous article
UNFICYP to formulate proposal for military contact between two sides
Next article
‘A new dawn for Europe’: Op-ed by Michel, Von Der Leyen and Sassoli