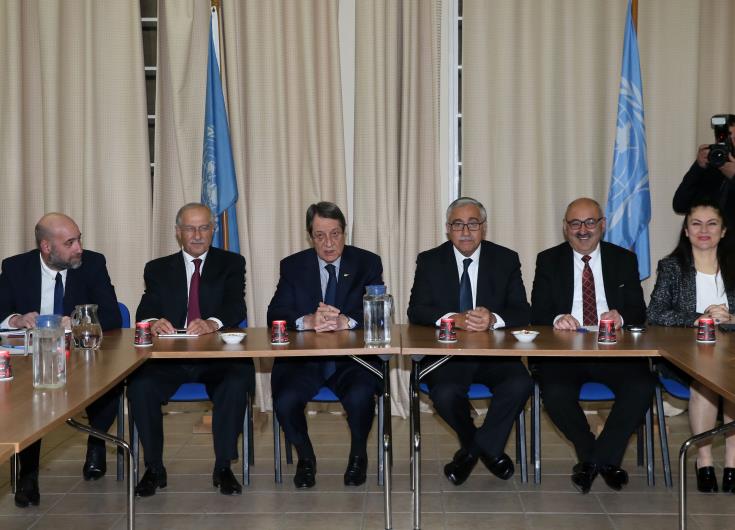 President Nicos Anastasiades said on Monday that he and Turkish Cypriot leader Mustafa Akinci have agreed on the need to increase cooperation so as to take all necessary measures to provide the maximum possible protection to the Cypriot people from coronavirus.

President Anastasiades was addressing the opening of an art exhibition at the Ledra Palace Hotel in the Nicosia buffer zone showcasing Greek Cypriot and Greek works of art and audiovisual material on the Turkish Cypriot community which were exchanged between the two communities.

The two leaders had earlier chaired a meeting of the Bicommunal Technical Committee on Health in the same premises.

“From the outset I would like to refer to the joint meeting Mustafa and myself held as a result of the growing concern and the dangers related with the spread of the coronavirus,” he said.

During the meeting, President Anastasiades announced, “it was jointly agreed that we need to increase our cooperation so as to take all necessary measures to provide the maximum possible protection to the Cypriot people, Greek and Turkish Cypriot.”

He continued noting that “the moral lesson which derives is that despite the differences that we might have or even divergent views on numerous issues, we cannot ignore dangers or events which take no notice of who is the strong or weak one and force us to jointly unite powers and act together.”

In the meantime, in a joint statement released by the United Nations in Cyprus, the Committee says it “took note that all necessary precautions have been taken by both sides in accordance with the guidelines of the World Health Organization (WHO), including screening.”

“The members of the Committee agreed to remain in close contact, exchanging information between the two communities and providing assistance, as deemed necessary,” it reads.

It is further recalled that the Technical Committee on Health has “successfully collaborated on similar health emergencies in the past.”

Following their meeting, the members of the Committee briefed the Turkish Cypriot leader Mustafa Akıncı, and the Greek Cypriot leader Nicos Anastasiades, who expressed satisfaction with what they had heard, it concluded.