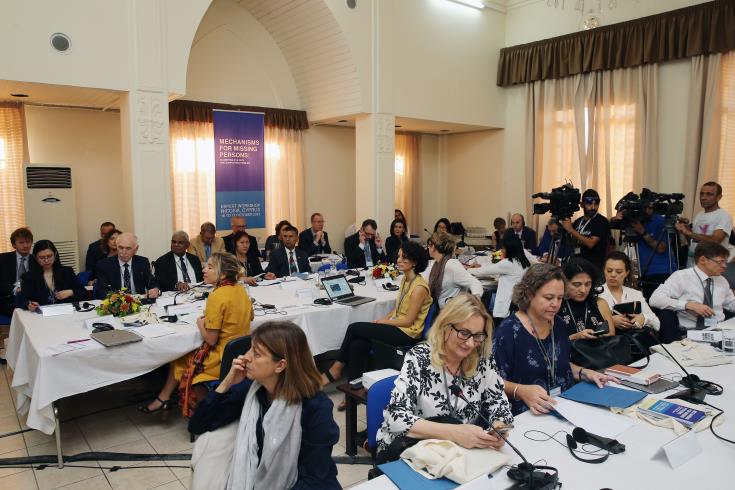 Sixty participants from more than 27 countries come together in Cyprus for a two-day specialised workshop on missing persons. The workshop is hosted at Ledra Palace Hotel in the buffer zone and is organized by the CMP, Committee on Missing Persons in Cyprus and ICRC, the International Committee of the Red Cross.

The workshop titled “Mechanisms for Missing Persons: Clarifying the fate and supporting families” brings together actors directly involved in the search for missing persons, management of the dead and identification of bodies and support for the families, representatives of the families or family associations and experts and leading institutions on the matter.

Over the next two days the participants will be exchanging methodologies, experiences, lessons, strategic and practical approaches on setting up effective mechanisms to ensure coordination and integrated response to search for missing persons, identification of bodies and response to the needs of the families. The participants will also visit the CMP Anthropological Laboratory.

ICRC Head of the Central Tracing Agency Florence Anselmo spoke to the participants about the significance of the workshop and the importance of it being hosted at the buffer zone of a country with an unresolved issue. She said that the CMP project in Cyprus has yielded results and it is an impressive achievement.

Anselmo said that after the two World Wars mechanisms were set up for news and information on missing persons which later were evolved into National Information Bureaus. She pointed out that these mechanisms need to be coordinated and expressed her belief that all the agencies represented here today will share valuable information and expertise for all.

Mechanisms were over the last decades set up in countries such as Bosnia, Serbia, Colombia, Iran, Iraq, Lebanon, Peru, El Salvador, Abkhazia, Sri Lanka and Ukraine.

Turkish Cypriot Member of CMA, Gulden Plumer Kucuk said that the experts’ discussions to follow and the exchange of good practices would definitely be useful to all and will have an added value to everyone’s job to identify the fate of the missing persons.
She added that delivering results is crucial for the CMP and there are realities on the ground to be taken into consideration. According to Kucuk, the financial support of the CMP is also crucial for its sustainability.

Leonidas Pantelides, the Greek Cypriot member at the Committee briefed the participants on the role of information in the project of CMP said that they act as police investigators with the only difference that they don’t look into the cause of death or the perpetrators but look into finding burial sites.

He explained that the investigation is carried out separately in the two communities because usually the informants do not want for the other community to know that they came forward with information. Then, when the information is collected, is shared with the other community, the analysts, the archeologists and their assistants and a case is built. The process moves to the other phases of locating sites, exhuming remains and identifying them.

According to Pantelides old information from the events of 63-63 which lasted a few months, and the 1974 Turkish invasion which lasted a few weeks, were passed on at the very beginning but were never synthesized and only recently have been digitized.

The third member of CMP Paul-Henri Anri told the participants that the worst wound of war from which there is no recovery and the only one that gets worse with time, is the issue of missing.

He added that at the political level the issue can be very toxic and stand in the way of reconciliation and political stability between countries and communities all over the world. Arni said that over the past 13 years lessons have been drawn at the CMP on what needs to be done and these include political will which, he pointed out, is the most important ingredient to create the conditions necessary to finding, identifying and returning missing persons to their loved ones.

He added that a mechanism such as CMP needs a mandate and a centralized structure for a coordinated strategy and successful operations. Arni also said that access to civilian, military and police decision makers and archives must be granted. He also spoke of the funding, which he said, must be available over many years.

On behalf of the European Commission Kjartan Bjornsson said that the EU is the biggest donor of the CMP with 25 million euro granted since 2006. For 2019 EU has contributed to the work of the Committee with 3 mln. He said that the work of the CMP has drawn international focus and the best practices are shared elsewhere. Bjornosson also said that the drama of the missing persons often undermines the relations between the two communities and makes reconciliation even harder.

Turkish troops invaded Cyprus on July 20, 1974.  Since then, the fate of hundreds of people remains unknown.

The total number of Greek Cypriot missing persons is 1,510 out of which 815 are still missing. Turkish Cypriot missing are 492 and 265 have been identified. So far exhumations took place in 1,298 sites and in 2007 marked the year were the biggest number of remains were found in the sites excavated. This percentage was 44%.

By In Cyprus
Previous article
Khmer Riche: How relatives and allies of Cambodia’s leader amassed wealth overseas
Next article
All about benches — some of Zaha Hadid’s creations (photos)