Cyprus has enormous possibilities in the EU, says EC spokesman 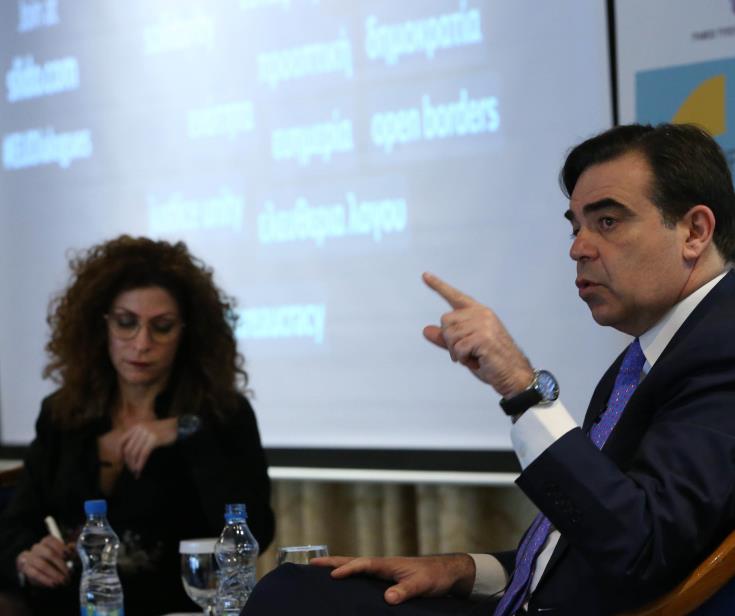 Cyprus is a modern member state of the EU, with enormous possibilities which, if maximized, could work to the benefit of a solution, Margaritis Schinas, the Chief Spokesperson of the European Commission said, during an open discussion in Nicosia.

The event was in the framework of EC`s citizens` dialogues for the Future of Europe and was attended by pupils from seven high schools in Cyprus.

Schinas said that the solution to the Cyprus problem should be a European one and also referred to the role of Cyprus as a bridge between the EU and the Arab world, praising the role of the Cyprus President in convening the first EU-Arab league Summit in the Egyptian resort of Sharm el Sheikh. He also referred to Turkey pointing out that Turkey is indeed a difficult neighbor and we must find ways to coexist and cooperate in areas such as terrorism, migration crisis and security, keeping Ankara on a steady EU path.

In his opening statement Schinas said that the EU institutions themselves are responsible for failing to present, in simple terms the EU to the citizens, saying that the EU is our own family, `our shield and spear` and it is not a distant, bureaucratic mechanism.

Schinas said that we have had the longest period of peace in Europe, a continent where almost everyone has fought with everyone else, we have managed to improve the standard of living eight times and moreover we have managed to promote EU as a soft power.

The chief Spokesperson of the EC expressed the view that the EU should cover the space left by the US in the areas of trade, security and international relations and to become more than a soft power.

He also talked about the challenges that exist in economy, employment, green energy and sustainable development as well as the significant rise of extreme populism and identity politics, especially ahead of the EU elections in May. He said that the EC does not get involved in political campaigns, but has a responsibility to respond when fake news is being spread and when inaccuracies about the EU are being said.

Schinas said that some people are engaged in extreme populism and want to destroy the EU, adding that the last time this happened we mourned millions of deaths in battlefields and cenotaphs and in crematoria. We are not entitled to let extremism and hatred to prevail, he said.

He also noted that all governments, MPs, municipalities, farmers, civil society need to be involved in bridging the gap between Brussels and European voters.

Schinas said that many citizens have genuine questions about the EU and what Brussels does and how they can benefit by the EU projects and funding, and we have an obligation to answer and convince them. All of them, he said, want solutions and answers. He also said that in order to win the citizens, the EU must offer more emotion, thrills and excitement and fewer numbers.

Schinas also spoke about the migration crisis saying that the second half of 2015 we had the largest population movement in Europe since the end of the WWII. He spoke of the crisis management the EU offered with the creation of reception centers and coastguard / border control for countries which had the largest flows of migrants and refugees.

He admitted that crisis management is not a solution and that people from countries of origin, such as Africa, should be encouraged to stay in their own countries and get education and jobs. Schinas said that EU has the mechanisms to further assist Cyprus in dealing with migration flows, if asked.

The EC chief Spokesperson encouraged people and especially the youth to get all the information they could find on EU, adding that all the EU institutions provide lots of information on their websites. PIO Director Sophie Michaelides, who facilitated the dialogue, said that the PIO could create a landing page with useful information and links.

The Commission`s Spokesperson also referred to issues of innovation and research in the new digital era and the era of artificial intelligence, adding that the EU must meet these challenges with the appropriate regulatory framework which would encourage new business opportunities.

By In Cyprus
Previous article23.8% in occupied north say whole of Cyprus is their country
Next articleJapan’s football association to launch esports league