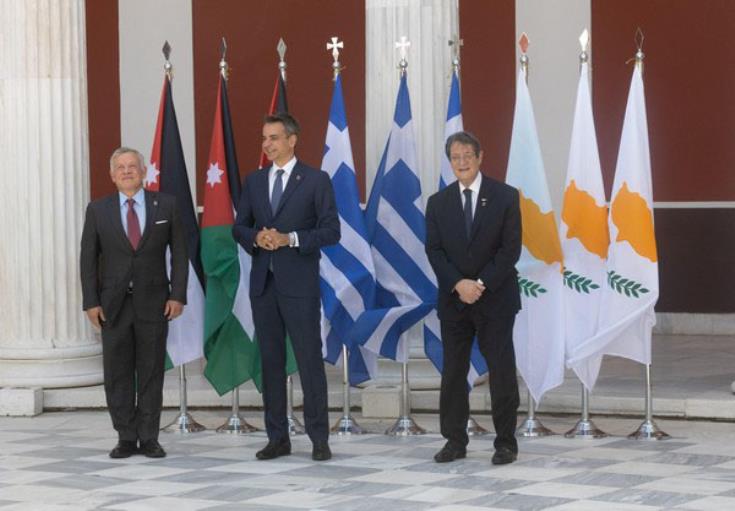 The leaders of Cyprus, Greece and Jordan have sent Turkey the message that all unilateral measures or actions that are not in line with relevant United Nations resolutions and international law or undermine efforts for a peaceful solution through negotiations must cease.

This message was in a joint statement issued late on Wednesday after the Trilateral Summit in Athens where  Cyprus President Nicos Anastasiades, Greek Prime Minister Kyriakos Mitsotakis and King Abdullah II of Jordan took part.

The three leaders focused on the Cyprus problem, including the latest developments in Varosha, the fenced off area of Famagusta, as well as the Presidential Statement issued by the UNSC on the provocative partial opening of the abandoned suburb by the Turkish side.

The three stressed their support for a just and viable solution of the Cyprus problem, based on the relevant UN Security Council resolutions and the international law.

They point out the importance of the role of the UN Peacekeeping Force in Cyprus, UNFICYP, in safeguarding peace and stability, based on the goals and principles of the UN.

They underline that a comprehensive settlement of the Cyprus problem will not only benefit the people of Cyprus but also contribute significantly to peace and stability in the region.

The joint statement adds that during the deliberations they discussed how to further enhance their cooperation in sectors including politics, economy, security and other fields of mutual interest in the post Covid-19 era.

In this context, they stress the importance of the Permanent Secretariat in Nicosia and its key role in facilitating cooperation between the three countries.

The three leaders agreed to resume the sectoral meetings that were suspended due to the Covid-19 pandemic, in order to identify specific plans that could offer opportunities in the framework of the three countries` strategic partnership.

The joint statement calls on all countries in the region to respect the sovereignty, the sovereign rights and the jurisdiction of each state over its maritime zones based on international law, in particular the Law of the Sea.

To this end, the leaders stress the importance of the commitment on a constructive dialogue and negotiations, in accordance with international law, the joint statement says.

The discussions they held, they say, paved the way to an enhanced cooperation and coordination of initiatives, with the aim to reach a tangible progress in all sectors until their next high level meeting.