Cyprus, Greece and Egypt call on Turkey to cease all illegal activities within Cyprus’ maritime zones 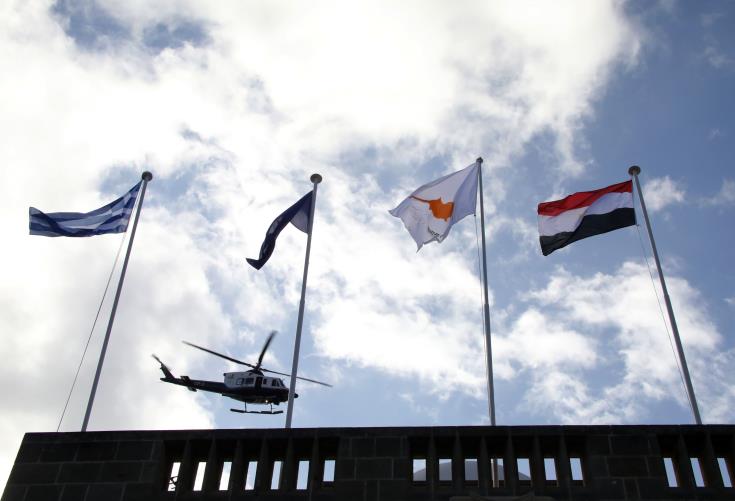 The Ministers of Foreign Affairs of Cyprus, Greece and Egypt have called on Turkey to cease all illegal activities within the maritime zones of Cyprus and refrain from similar actions in the future, reaffirming their support to efforts to reach a comprehensive settlement of the Cyprus problem.

In a joint declaration after their trilateral meeting on the margins of the 73rd session of the UN General Assembly in New York, the Ministers of Foreign Affairs of Cyprus, Greece and Egypt, Nicos Christodoulides, Nicos Kotzias and Sameh Shoukry respectively, note that “this trilateral consultations mechanism, launched in New York six years ago, reflects the commitment of the three states to work closely together, towards promoting peace, security, stability and prosperity in Eastern Mediterranean and facilitates cooperation in this respect.”

“Determined to pursue these objectives with unwavering resolve, the Ministers reaffirmed their strong commitment to intensify common efforts towards that direction, also in view of the upcoming Summit to be held in Crete, on October 10, 2018,” they note.

The declaration says that, “convinced that building cooperative relations offers the best prospects for the promotion of economic growth and development, the Ministers evaluated progress made on the implementation of joint projects in priority areas agreed in the context of previous Summits.”

It adds that, “against this background, the Ministers renewed their commitment to strengthen collaborative action inter-alia in the areas of economic cooperation, culture, ICT, energy, environment, maritime transport and tourism and protection of cultural heritage, including underwater cultural heritage.”

“In the same context, the Ministers reiterated their willingness to continue cooperation on Diaspora issues, focusing mainly on joint youth programmes. The Ministers also welcomed the recent decision regarding the expansion of trilateral cooperation with a view to covering also the realm of Parliaments,” it says.

According to the declaration, “the Ministers expressed their willingness to work together towards achieving an enhanced, mutually beneficial EU-Egypt Partnership, leading towards a stronger strategic engagement in areas of common interest.”

“Furthermore, they welcomed the appointment of the new Secretary General of the Union for the Mediterranean, providing a new impetus as regards cooperation between the two shores of the Mediterranean, within the framework of the Southern Dimension of the European Neighbourhood Policy,” the declaration notes.

The declaration says “the Ministers also reiterated satisfaction with the results of the 3rd Rhodes Conference for Security and Stability that took place in June 2018.”

“The Ministers engaged in a wide-ranging discussion on a number of regional issues of mutual concern, including the Israeli-Palestinian conflict as well as other developments in the Middle East (Syria, Libya, the fight against terrorism) and their impact on our region. The important and constructive role of Egypt in the efforts to resolve these conflicts was particularly highlighted,” the Ministers say in their declaration.

Furthermore, “the Ministers agreed to intensify efforts to tackle regional challenges, to fight terrorism and violent extremism in all its forms and manifestations, increase information sharing and promote regional security, long-term stability and prosperity.”

“The Ministers reiterated that deliberate destruction and looting of cultural heritage in Syria and Iraq is an act of barbarity substantially contributing to the financing of terrorist groups. They also expressed support on the need to further address the aspect of trafficking in archaeological objects obtained through looting or illegal excavations into the agenda of countering terrorism financing. In this context, the three Ministers recognized the importance of the Convention on Offences Related to Cultural Property, the Nicosia Convention, which was opened for signature on 19 May 2017 in Nicosia, as the only international treaty specifically dealing with the criminalization of the illicit trafficking of cultural property,” the declaration says.

It adds that “the Ministers underlined their resolve to further strengthen cooperation with a view to promoting good neighbourly relations, regional stability, peace and prosperity” and that “they also reiterated that this cooperation is founded upon established principles of international law” and “emphasized the universal character of the UN Convention on the Law of the Sea and stressed their commitment to proceed expeditiously with negotiations on the delimitation of maritime zones where appropriate.”

“The Ministers emphasized the need to respect the sovereignty, sovereign rights and jurisdiction each state has over its maritime zones in accordance with International Law, as reflected in the UNCLOS,” it says.

According to the declaration, “in this respect, they called on Turkey to cease all illegal activities within the maritime zones of Cyprus and refrain from similar actions in the future.”

“The Ministers reaffirmed their unwavering support to the efforts of the Government of the Republic of Cyprus to reach a comprehensive settlement of the Cyprus problem that will reunify Cyprus in a viable, functional state in accordance with UN Security Council resolutions and International Law, without foreign guarantees and troops and based on the principles on which the EU is founded. They stressed that the United Nations remains the only forum through which a settlement can be achieved and that UNFICYP`s presence is indispensable, as long as the Republic of Cyprus remains under illegal Turkish military occupation,” it says.

Regarding the ongoing refugee and migratory crisis, “the Ministers agreed that effective management is the responsibility not only of neighbouring states and of Europe but also of the international community as a whole,” and “they also expressed appreciation for Egypt`s efforts to address migration challenges, by accommodating refugees and migrants and working to prevent illegal migration flows as well as smuggling and trafficking in human beings.”

“The Ministers emphasized and re-affirmed their commitment to mobilize all their capabilities to effectively promote common values and work towards unleashing the full potential in our neighbourhood to the benefit of the peoples in our countries and in the wider region,” the declaration concludes.