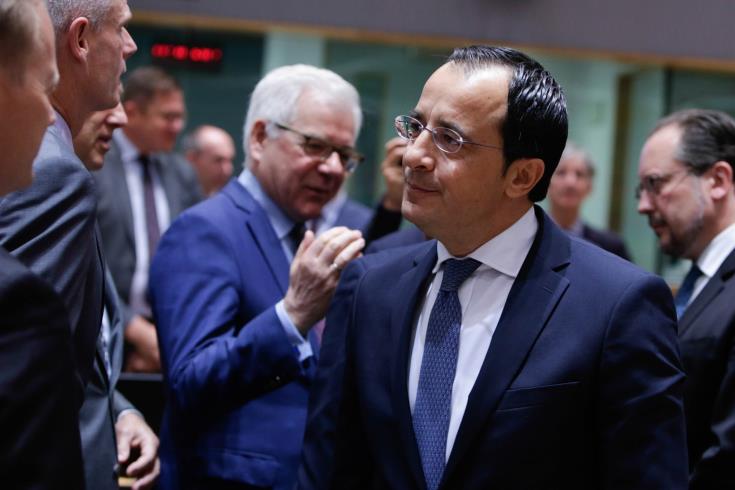 Foreign Minister  Nicos Christodoulides told his Turkish counterpart, Mevlut Cavusoglu, that the only Cyprus solution under negotiation is the bizonal bicommunal federation, adding that Nicosia is ready for a results-oriented process, by taking advantage of what was achieved during the last round of talks, in Crans-Montana.

Monday’s exchange between the two men took place in front of journalists, on the sidelines of the UN General Assembly, in New York, as Christodoulides was on his way to a bilateral meeting with Greek Foreign Minister Nikos Dendias.

Christodoulides asked the Turkish Foreign Minister if they were going to agree on the terms of reference, and questioned the need for a five-party conference before the terms were agreed.

When the Turkish Foreign Minister asked if this was a negotiation for a two state solution, Christodoulides replied “bizonal bicommunal federation. Forget two state [solution] and confederation.”

Cavusoglu went on to say that in Crans-Montana, President Anastasiades spoke about a confederation, with the Turkish Minister pointing to the minutes of the 2017 meeting in the Swiss resort.

Christodoulides disagreed, saying that “we have also the minutes” and challenged his counterpart to agree to work on a bizonal bicommunal federal solution. “Are you ready? We can shake hands today and agree that we are working for this” said the Foreign Minister of Cyprus.

On his part, Cavusoglu said that Ankara supported all the efforts in the past, including the Annan plan, and the process in Crans-Montana. “We failed unfortunately. I am not going to say who is right and who is wrong but this time we can not afford another failure,” he added and pointed to the need to agree on a results-oriented process.

Christodoulides replied that he fully agreed on a results-oriented process. “We are ready. We have to take advantage of what we have achieved during the last negotiation process, where it was the first time that we were so close” he said, referring to the 2017 Conference on Cyprus, in Crans-Montana.

Cavusoglu insisted however that he wanted to make sure “what we are going to negotiate”, adding that the Greek Cypriot side is presenting different ideas, including a two-state solution, confederation, federation. “So, lets sit and open the discussion” he added.

I can give you the answer now, there is only bizonal bicommunal federation, the Foreign Minister of Cyprus replied.

By In Cyprus
Previous articleSpike in airfares to Athens, Thessaloniki and London in October
Next articleUber receives just a two-month London licence with new safety conditions