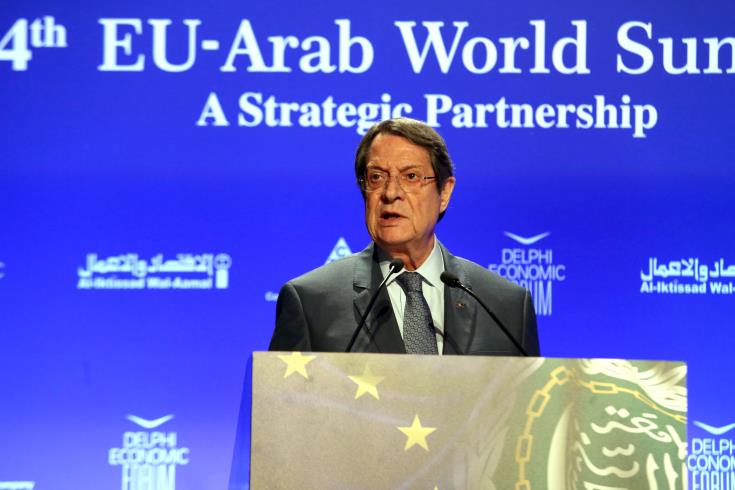 President Nicos Anastasiades stressed that the Republic of Cyprus is determined to proceed unhindered with its energy plans and to make good use of the gas reserves that have been discovered, as a source of regional economic cooperation, growth and prosperity.

Speaking at the 4th Euro-Arab World Summit, in Athens, Anastasiades said that the Cypriot government never disregarded the interests of the Turkish Cypriots, and for that reason relevant proposals have been tabled until the Cyprus settlement.

Referring to the Cyprus problem, President Anastasiades said that its solution “will represent a transformation of the Republic of Cyprus into a bicommunal bizonal state, which will secure the human rights and the two communities’ prospects of cooperation, without dependencies on third countries”. “We do not need guarantors and legal guardians. We can live together peacefully and co-create a joint perspective”, President Anastasiades added.

He also said that it is the joint position of Greece and Cyprus that stability, peace and economic growth can be pursued only through collective action and innovative alliances in the region of the Eastern Mediterranean. In this context, Greece and Cyprus proceeded to the establishment of bilateral and trilateral alliances with states of the region, putting emphasis on a positive agenda in the areas of common interest, President Anastasiades said.

“These alliances are not directed against any third country. On the contrary, every country is welcome to join, on the condition that it respects the basic principles of international law and the good neighbour relations”, President of the Republic of Cyprus underlined.