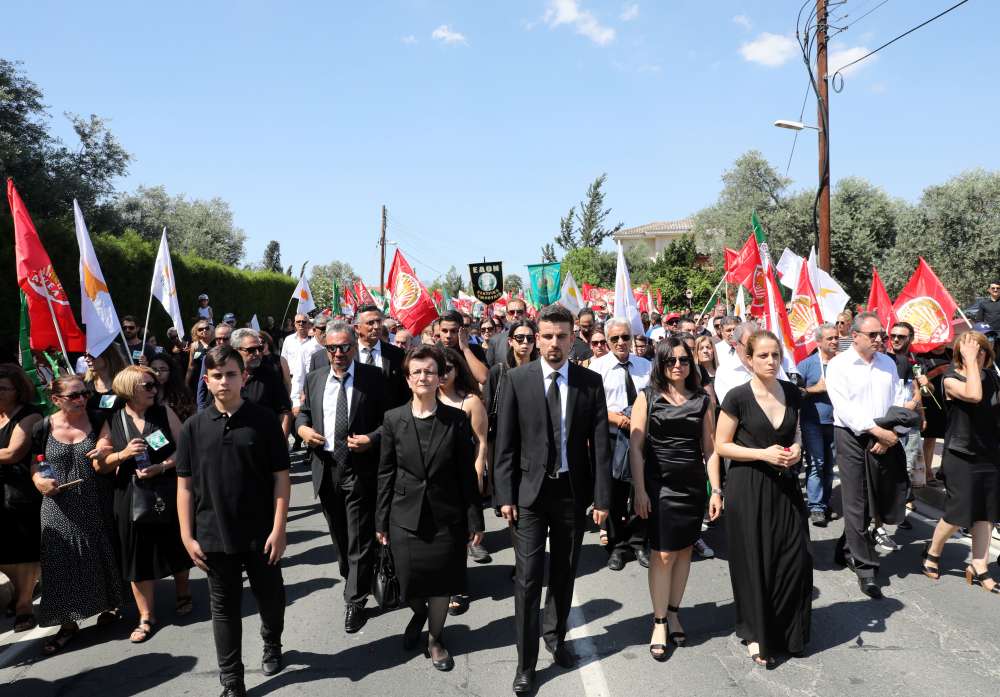 The people of Cyprus bade farewell on Tuesday to former President, Demetris Christofias, who passed away last Friday at the age of 72. He also served as President of the House of Representatives and leader of Cyprus’ communist party, AKEL.

The state funeral took place this afternoon at the Holy Church of God’s Wisdom, in Strovolos.

The President of Cyprus Nicos Anastasiades and the Greek Prime Minister Alexis Tsipras attended the funeral, along with Cabinet members and the President of the House of Representatives Demetris Syllouris.

Foreign diplomats, the Special Representative of the UN Secretary-General in Cyprus, delegations from foreign countries, representatives of Greek political parties as well as a delegation from the EP group of the European United Left, also attended.

The coffin of former President Christofias was carried to the church in a gun carriage procession and was greeted with applause by the crowd that gathered outside.

The eulogy to former President was read by AKEL’s General Secretary Andros Kyprianou and Christofias’ son, Christos. Kyprianou said in his speech that Demetris Christofias was an international personality who stood in solidarity with the working class around the world.

During his tenure, a number of convergences were achieved for the settlement of the Cyprus problem, which, according to Kyprianou, reflect everything that unites the people of Cyprus living in both sides of the divide, while offering a prospect for the coexistence of Greek Cypriots and Turkish Cypriots in the Republic of Cyprus.

On his part, Christos Christofias said that his father bids farewell to this world as an “honest, decent man, with integrity.” He also said that the former President was eager to see the reunification of Cyprus and the return to his home city of Dikomo, now in the Turkish occupied northern part of Cyprus.

After the funeral, the coffin of the former President, covered in the flag of Cyprus, was buried in the cemetery of Engomi.

Earlier in the morning, the remains of former President of Cyprus Demetris Christofias lay in repose in the trade union headquarters of PEO, in Nicosia.

His coffin arrived amid applause from the crowd that gathered outside PEO premises to pay their respects. Christofias’ medals and distinctions were placed on top of the coffin. Outside PEO, the flags of Cyprus and AKEL were flown at half-mast.

Ordinary people from all over Cyprus, including many Turkish Cypriots, as well as party officials, diplomats and representatives of foreign delegations lined up to pay their respects.
(Cyprus News Agency)

By In Cyprus
Previous articleFacebook to give data on hate speech suspects to French courts – minister
Next articleTrump denies woman’s sexual assault accusation: ‘She’s not my type’