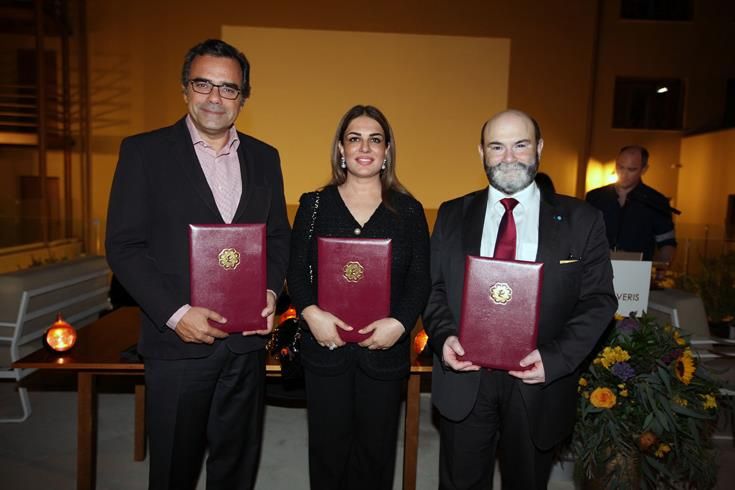 Α Letter of Intent was signed between Space Trust, ‎the Municipality of Nicosia and the Cyprus Space Exploration Organisation (CSEO), to establish mutual cooperation in Cyprus as part of the (Zero G) 0G summit.

The cooperation also aims to mobilise world leaders towards peaceful uses of space science and technology on Earth,  a press release issued by the three parties says.

The letter of intent was signed in Nicosia by Namira Salim, Founder and Executive Chairperson of Space Trust, Mayor of Nicosia Constantinos Yiorkadjis and CSEO President George Danos.

Namira Salim, said that “0G Summit is Space Trust`s annual State Level convening, to mobilise world leaders to embrace Space Diplomacy as a sustainable tool for peace-making on Earth—one, that transcends national borders in our new age of Space Exploration, i.e., Democratisation of Space—and, to work toward launching 0G Summit 2030, the first peace summit in orbit, towards Space2030 in support of the 2030 United Nations Sustainable Development Agenda”.

0G Summit has been presented at the highest levels at top space industry and UN events, having engaged ten UN member states, since 2016 all around the world, carving itself as the leading actor in Space Diplomacy in the Age of NewSpace or democratisation of Space, which makes Space Inclusive for all nations, the press release says.‎

The statement adds that while the timeline of this agreement is expected to be implemented in 3-5 years, the time frame preceding this period will see 0G Summit, premier Space Peace Summit on Earth, launched globally in order to mobilize a multilateral movement. ‎ ‎

Nicosia Mayor said “the Municipality of Nicosia is pleased to sign a Letter of Intent with Space Trust and the Cyprus Space Exploration Organisation, with the intention to cooperate mutually for shared goals, to establish in Cyprus, the Secretariat of Space Trust`s lead initiative, (Zero G) 0G Summit, upon the invitation of the Government of the Republic of Cyprus.”

“Cyprus is strategically positioned as a crossroads between the East and West, North and South and its capital Nicosia has been historically bridging different cultures and civilisations.‎ Therefore, for Nicosia to be at the heart of this new type of space diplomacy, it is an honour,” he stressed.

In cooperation with the Cyprus Space Exploration Organis‎ation, 0G Summit, envisions to support and promote research, innovation, entrepreneurship and education ‎for Space, Science and Technology, Technological Innovation and International Cooperation, for ‎the next generation of scientists, explorers and inter-planetary ambassadors, to launch Cyprus as a niche player in global space research and exploration, the press release says.

CSEO President George Danos noted that “we are signing a unique agreement that brings a new type of diplomacy towards peace. From space, the Earth has no boundaries and at the International Space Station all nations cooperate in harmony to benefit humanity via peaceful uses of Space technologies.”
‎
The press release says that at Space Trust`s annual High Level event during the UN General Assembly in New York last month, the Republic of Cyprus has accepted Space Trust’s invitation to become a founding nation of 0G Summit, amongst other nations and accordingly, taking a lead role at the Head of State Level to extend it`s support and cooperation for mobilising world leaders and governments globally for the said convening in Cyprus and abroad.

The Cyprus Space Exploration Organisation (CSEO) is an NGO, established by key international people in industry and academia, and based in Cyprus. It promotes scientific research and development in the field of space exploration, astronautics and astrophysics, and enhances and actively develops the local space industry, leading to the advancement of high tech industry and collaboration with other space-faring nations in scientific, space and planetary missions.