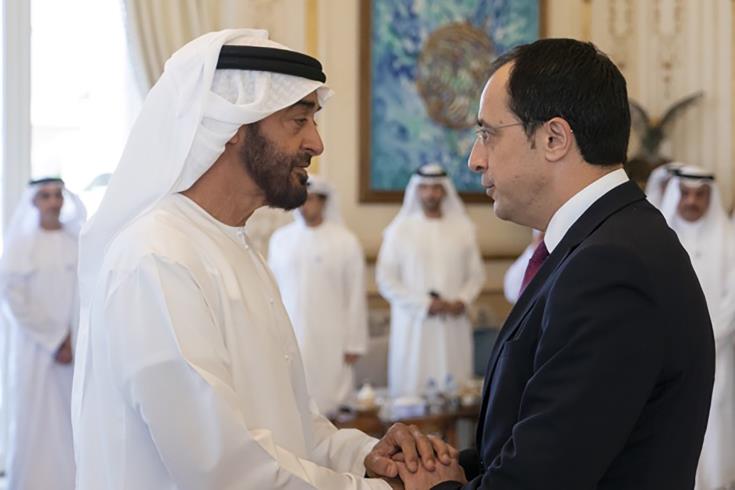 Cyprus and the United Arab Emirates have agreed to enhance and deepen their relations.

During his visit, Minister Christodoulides was received by Crown Prince Sheikh Mohammed bin Zayed Al Nahyan, during which he conveyed  President Nicos Anastasiades’ greetings and discussed  bilateral relations  as well as regional developments.

The Foreign Ministers of Cyprus and the UAE reviewed the two countries’ bilateral relations and reaffirmed the excellent level of relations, while they also agreed on ways to further enhance and deepen them in mutually beneficial fields.

In this framework they agreed to fulfil, during the next months, deliberations for the signing, among others, of documents for setting up a Joint Committee of Cooperation on combating terrorism and extremism as well as on security issues.

During the deliberations, the two sides also discussed regional developments and how the two countries can through joint actions work to address challenges, with a view to promote stability and security in the broader Middle East region.

Moreover, the two Ministers discussed  EU-UAE relations and expressed identical views as regards the strategic importance of these relations and the possible mutual benefits from their further enhancement.

Chistodoulides briefed his counterpart on the Cyprus problem, developments in the energy sector in the Eastern Mediterranean, the trilateral cooperation mechanisms with countries in the region, and expressed his satisfaction for the UAE’s support as regards the Cyprus problem, particularly in the framework of international organisations.

The Cypriot Minister also had a meeting with the Minister of State and Director-General and CEO of the Abu Dhabi National Oil Company Sultan Ahmed Al Jaber, whom he briefed on the Republic of Cyprus’ plans in the energy sector and the broader energy developments in the Eastern Mediterranean. The two officials also exchanged views about the importance of further enhancing relations between Cyprus and the UAE.

During his stay in Abu Dhabi, Christodoulides visited the Countering Violent Extremism Centre of Excellence “Hedayah”, where he was briefed by the head of the organization Ali Rashid Al Nuaimi about the centre’s activities at the international level. The two sides expressed their common will for cooperation between the Republic of Cyprus and “Hedayah”.

Moreover, Christodoulides had meetings with the heads of the Mubadala investment fund and the Abu Dhabi Global Market, Waleed Al Mokarrab Al Muhairi and Ahmed Ali Al Sayegh, with whom he discussed concrete ways of promoting cooperation with Cyprus.