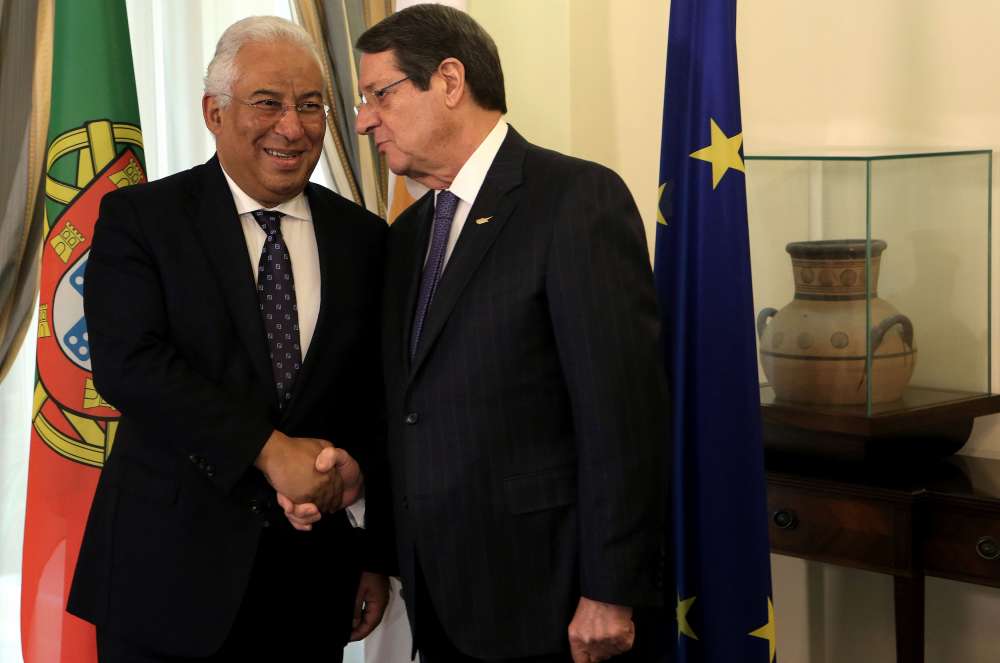 Cyprus and Portugal have agreed to strengthen ties, Portuguese Prime Minister Antonio Costa and Cypus President Nicos Anastasiades said on Tuesday, announcing their intention to organise a business forum, to further their cooperation on maritime science and to share best practices in tourism.

They were speaking after the conclusion of bilateral consultations at the Presidential Palace, in the context of Costa’s official visit to Cyprus. He is the first Portuguese Prime Minister to visit the island. Cyprus’ Foreign Minister Nikos Christodoulides and Government Spokesman Prodromos Prodromou were also present during the consultations.

“Geographically we are in opposite extremes of our continent but we are very close sharing a common vision about the future of the European Union, the most important challenges we need to face at European level and in the wish to strengthen our bilateral relations,” Costa said.

Referring to relations with Cyprus so far, he noted that Portugal has signed a Memorandum of Understanding on Political Consultations in 2013 and upgraded its diplomatic representation to Ambassador level in 2014.

“We are looking to increase political consultations,” the Portuguese Prime Minister said.

On the trade relations between the two countries he pointed out that they are “slowly expanding but they are still modest.”

“Considering the structures of both economies there is clear room for improvement, not only in traditional sectors but also in more technological areas,” Costa said.

During our consultations, he continued, we have identified three specific events we need to concentrate our efforts on. To that extent he spoke of the “organisation of a Business Forum to put entrepreneurial communities in contact and strengthen the people to people contact.”

Secondly, he said, “increase our cooperation on scientific domain, especially on maritime science” and finally, “share best practices in the tourism sector.”

On his part, President Anastasiades spoke of “very constructive consultations” during which “we reviewed the architecture of our cooperation and discussed a number of ways to further expand our relations, both bilaterally and within the context of the European Union.”

“I am very glad to attest that our convergence of views with Portugal, on a vast field of areas and synergies like trade and investment, shipping, energy, education and culture is more than evident,” he noted.

To this end, he added, “we endeavour to continue our high-level dialogue, so as to identify opportunities for closer cooperation between Cyprus and Portugal.”

President Anastasiades also spoke of the possibility of “organising a business forum in the near future, with the aim to pursue stronger trade relations and promote business opportunities between Cypriot and Portuguese entrepreneurs, as well as to further boost people-to-people contacts.”

Referring to the Cyprus problem, he said he briefed Costa on the latest developments on the Cyprus Problem, which he stressed is a European problem and “particularly the efforts of the Special Envoy of the UN Secretary-General to reach an agreement on the “Terms of Reference” as regards the way forward.”

“I reiterated to the Prime Minister that the vision of all Cypriots remains none other than to reach a viable and functional settlement that will reunite Cyprus in a truly independent and modern European State, free of foreign interventions, troops and guarantees,” President Anastasiades said.

He further expressed the “sincere gratitude and appreciation of the government and the people of Cyprus to the Prime Minister and the government of Portugal, for the principled stance and important support they offer to Cyprus in our efforts to reach a comprehensive settlement in line with the UN Security Council Resolutions and the EU acquis, values and principles.”

President Anastasiades also said he briefed the Portuguese Prime Minister “on the implementation of our hydrocarbon exploration program and how Cyprus can contribute substantially to the European Union’s energy security and diversification of sources and routes.”
Cyprus, he pointed out, “is greatly invested in contributing to the peace, prosperity and security of its region.”

“In this respect, I also informed about the trilateral partnerships we have established with neighbouring countries, together with Greece, to the benefit of the whole region,” Anastasiades said.

By In Cyprus
Previous articleValue of building permits rises by 38.1% in January – October 2018
Next articleCyprus ranks 38th among 180 countries in public sector corruption (interactive map)