Cyprus and Poland to celebrate 60th anniversary of diplomatic relations 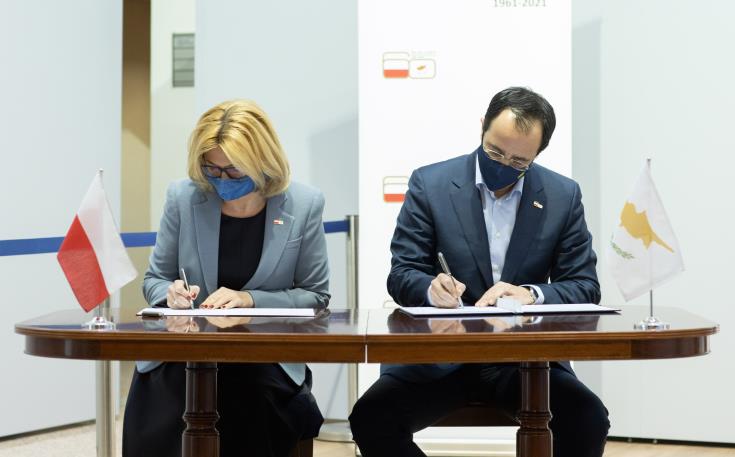 Cyprus and Poland signed on Monday the Declaration of Intent for the celebration of the 60th anniversary of the establishment of diplomatic relations between the two countries. The declaration was signed in Nicosia by Minister of Foreign Affairs Nikos Christodoulides and Polish Ambassador Irena Lichnerowicz-Augustyn.

In statements after the signing ceremony, the Minister said that on January 15th of 1961, a few months after the Republic of Cyprus became an independence State, Poland was one of the first countries to establish diplomatic relations with Cyprus and to open an Embassy in Nicosia.

Through the centuries, he said, Cypriots and Poles have strengthened these ties, and the establishment of diplomatic relations between the governments paved the way to institutionalise the relationship and elevate it to new, unprecedented levels, as is nowadays reflected at the political, economic and cultural level and, most importantly perhaps, at the level of people to people contacts.

“Our countries’ paths have crossed in recent times in significant and meaningful ways. Having joined the European Union together in 2004, and having also shared responsibility for successive EU Presidencies as members of the same Trio in 2012, Cyprus and Poland have been collaborating closer than ever before on the international arena, sharing  a common concern and interest in the affairs of our Continent,” he went on to say.

The Declaration of Intent “reaffirms our commitment to further strengthen our bilateral cooperation. We shall do so by promoting joint political, social and cultural events and have agreed on a commemorative logo which will be used during all the events organized during this celebratory year”.

He also expressed satisfaction for the confirmation of the official visit of H.E. the President of the Republic of Poland  Andrzej Duda within 2021, saying “I am certain the visit will give a boost to intensifying bilateral cooperation in all spheres of mutual interest, as well as expanding the institutional framework of our relations”.

In her remarks, the Polish Ambassador conveyed the best wishes and assurances of the highest esteem from the Minister of Foreign Affairs of the Republic of Poland Zbigniew Rau and said that both, in the past and present, Poland and Cyprus have had many occasions to work together for bilateral, European and international benefit.

“Poles and Cypriots know each other very well. Before the pandemic Cyprus was in the top ten of the most popular tourist destinations for the Polish people. At the same time, more and more Cypriots decided to travel to Poland. I very much hope that in the near future it will be happening again,” she said.

She pointed out that some provisions of the declaration have already been fulfilled. The joint logo of the celebrations has been designed and the Polish Post has edited a special anniversary postcard, while in the Embassy they are working on further projects, for the time being mostly on-line but not only.

The Ambassador added that she looks forward to welcoming the Minister at the National Day event in May, as well as to carrying out the Polish-Cypriot seminar on new technologies with female experts from our countries.