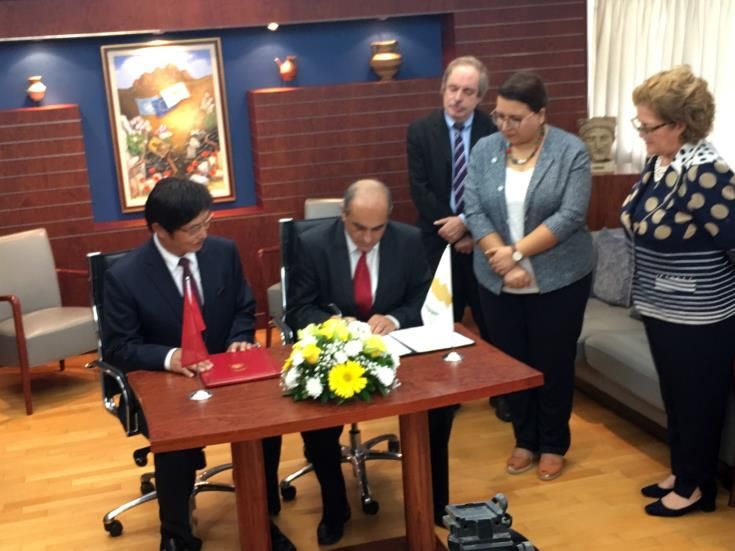 The House of Representatives of the Republic of Cyprus and the National People`s Congress (NPC) of the People`s Republic of China sign a Memorandum of Understanding, to further strengthen bilateral ties and promote cooperation between the two legislatures.

Speaking before the signing of the Memorandum, in Nicosia, Syllouris said that the ceremony marks the conclusion of efforts that began a few months ago.

He explained that the two sides sign the agreement separately in order to move on quicker and said that meetings in Cyprus and China will follow soon.

Speaking through an interpreter, Huang said the memorandum will be a landmark when it comes to the deepening of relations between the two legislative bodies. “China will continue its tireless efforts with Cyprus to lift bilateral relations to a new level” he added.

According to the Memorandum of Understanding, the two sides commit to further strengthen their bilateral relations and the cooperation between the two legislatures.

Cyprus further stipulates its respect towards the One-China Policy, while China expresses support for a just, viable and lasting Cyprus settlement, in the basis of UN resolutions.

Moreover, the two sides pledge to continue with high-level exchanges and promote ties between working bodies, while activating their interparliamentary friendship groups. They express finally their readiness to urge their respective governments in proceeding towards a better legal framework, supporting developmental strategies and cooperation in the framework of the “One Belt – One Road” initiative.
(Cyprus News Agency)

By In Cyprus
Previous articleUpdated: New record as tourist arrivals rise 7.5% in September
Next articleFrench woman jailed for pretending to be a terrorism victim