Cyprus among the main topics of Tsipras-Erdoğan meeting in Ankara 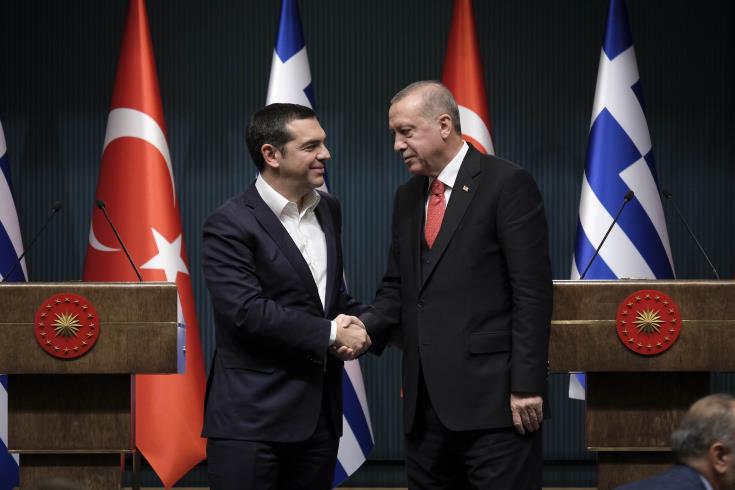 The Cyprus issue was among the main topics the Greek Prime Minister Alexis Tsipras discussed on Tuesday with Turkish President Recep Tayyip Erdoğan, in the framework of an official visit in Ankara.

In statements after the meeting, Tsipras said that Athens and Ankara need to agree on holding preparatory meetings on the crucial issue of security – one of the chapters of Cyprus negotiations – where both countries are involved. Erdoğan said from his part that regardless of the solution model for Cyprus, political equality for Turkish Cypriots was required.

According to Tsipras, in 2015 and 2016, talks for a Cyprus settlement advanced and the sides were close to a solution, with the opening of difficult chapters such as the issue of security. “Unfortunately, the heinous coup followed here in Turkey, along with developments which put the brakes on this positive course” he said.

The Greek Premier also highlighted the need to have a just and viable Cyprus solution, in the framework of UN resolutions, to the benefit of all Cypriot people, Greek Cypriots and Turkish Cypriots. The solution, he went on, should turn the reunited federal Cyprus into “a normal country of the region, a normal country of the EU.” In this new endeavour, he added, we should avoid the mistakes of the past “and therefore I came to the conclusion that we need to agree on holding preparatory meetings on the crucial issue of security, where Greece and Turkey are also involved.”

Tsipras said, moreover, that respecting international law in the Eastern Mediterranean was important and underlined the need for energy to act as a bridge for cooperation and not as an obstacle and a cause for conflict in the region.

From his part, the Turkish President said that Cyprus was one of the main issues he discussed with Tsipras. “We believe that a thorough evaluation should be done in the framework of the exploratory process in which we are in” he said.

According to Erdoğan, before embarking on a new process, the two sides should set a new vision and a new roadmap. “It should be clear beforehand on how negotiations will be conducted. For Turkey, the political equality of Turkish Cypriots is a basic parameter. Whatever the solution model, the need for that should be taken into account” he said.

Greek diplomatic sources told CNA that during his meeting with Tsipras, the Turkish President referred to a Cyprus settlement in terms of reunification. The same sources said that it was agreed to start soon with preparatory meetings on security, however the level of representation and the timeframe for these meetings remained open.

The Greek side believes that if such preparatory meetings on security were held back in 2016, as Athens wanted, talks at Crans Montana would have been more successful, according to the diplomatic sources.

Moreover, it was noted that the Turkish President referred to a Cyprus settlement in terms of reunification, a point which became clear throughout the meeting. Form his part, Tsipras was also clear that this is the only option the Greek side is discussing, “a solution on the basis of the well-known parameters” as CNA learns.

The same sources also said that the two men discussed the period ahead, in relation to Cyprus. The Greek Premier underlined the need to respect international law in the Eastern Mediterranean and highlighted the right of the Republic of Cyprus to exploit its natural resources, while pointing to the importance of energy cooperation.

By In Cyprus
Previous articleLaunch of Hellas Sat 4 a new chapter in space history of Cyprus and Greece, Minister says (video)
Next articleEvents and Traditional occupations in Laiki Geitonia Neighbourhood in Lefkosia – February 2019