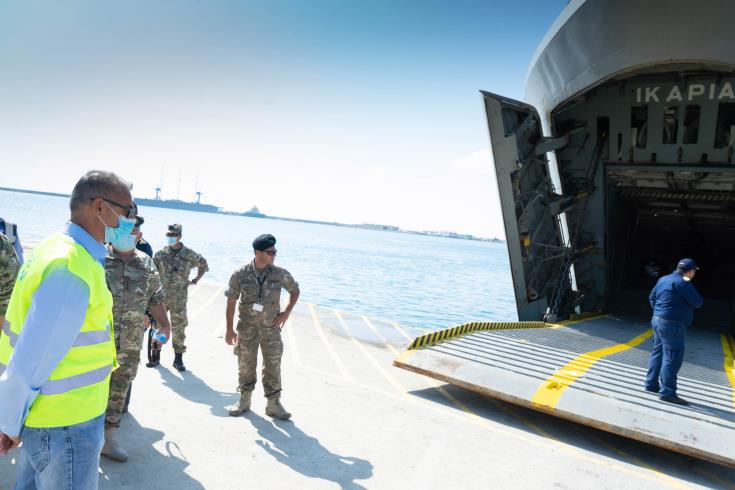 The humanitarian aid for the people of Lebanon, collected in Cyprus after authorities launched a campaign to respond to immediate needs following a blast in Beirut port, was loaded on Tuesday onboard a Greek military ship at the port of Limassol.

The Chief of the National Guard and the Commissioner for Volunteerism and Non-Governmental Organisations were also present as 70 tons of food were loaded on board of “Ikaria” vessel, that docked earlier on Tuesday morning in Limassol.

The aid was collected after a campaign coordinated by the Office of the Commissioner for Volunteerism and Non-Governmental Organisations, in cooperation with the Foreign Ministry and was transferred to Limassol port with the contribution of the National Guard and the help of Civil Defence.

In his statements, Commissioner for Volunteerism Yiannis Yiannaki said that 70 tons of food, along with medical and other equipment were loaded on the Greek ship and the aid “is expected to reach Lebanon tomorrow morning” in order to be delivered to those in need.

Aid was collected by 15 National Guard trucks from all cities in Cyprus, with Yiannakis thanking the Chief for their assistance.

He also expressed content about the way people and other organised entities responded to a call to donate aid for the people of Lebanon.

The Commissioner also thanked the Civil Defence, volunteers, as well as the Greek government.

People have demonstrated their humanitarian sensitivities and collection of aid continues, Yiannakis said, adding that “we ought to be proud as Cypriots, because once more we stood by the side of our neighbours when they need us most.”

An announcement by the Office of the Commissioner for Volunteerism says that aid will be collected until Friday, August 14.

By In Cyprus
Previous articleTotal government employment up in July due to temporary staff increase
Next articleBeirut: Officials warned of disaster in July