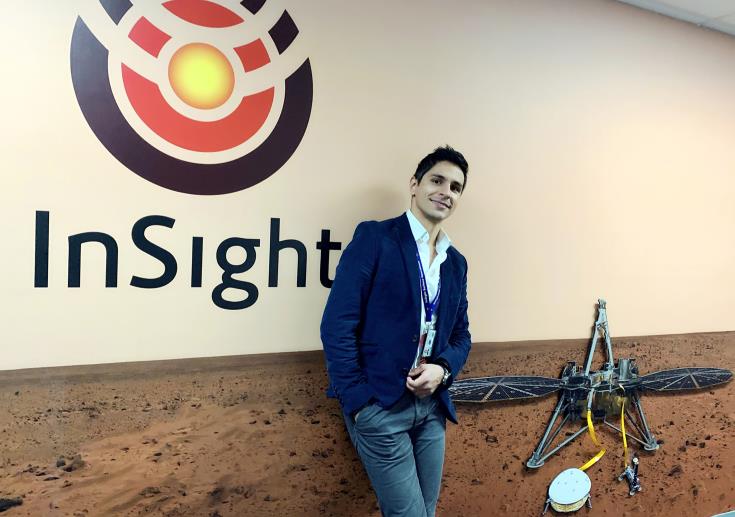 NASA has given two rocks on planet Mars names in the Cypriot dialect — moutti and zavos — in honour of Cypriot scientist Dr Constantinos Charalambous who works on the NASA InSight mission, the Cyprus News Agency has reported..

The Limassol-born planetary scientist and a research member of the Cyprus Space Exploration Organisation (CSEO) has since InSight’s landing on Mars on November 26 been supporting surface operations for the mission at NASA Jet Propulsion Laboratory (JPL) in Pasadena, California.

He has worked in the group for site selection for both the heat flow probe (HP3) and Seismic Experiment for Interior Structure (SEIS) instruments on the surface of Mars, with SEIS having successfully been deployed on December 19.

Given by NASA the opportunity to name two rocks, he picked “moutti” (nose or summit) and “zavos” (askew, pointing at an angle) from the Cypriot  dialect.

“This is the first time we have names in the Cypriot dialect on the red planet,” Dr. Charalambous, told CNA.

As a scientist member for InSight, his focus now during the surface operations is on the analysis, performance and scientific interpretation of the SP seismometer’s data returned daily from Mars. After the first data arrival from on the deck of the lander on Mars, he was responsible for the processing and sonification of the seismometer’s signal into the audible range for the human ear.

His overall work will bring out an in-depth study of the crust, mantle, and core of Mars, and more generally, the evolutionary history of the planet, in a mission that is expected to last for until 2 years.

“I’m hoping that through this fascinating journey we’ll unfold all the mysteries in play that comprise  the signals we receive from 225 million kilometres away – either from truly seismic or aseismic contributions, such as the wind, atmospheric or temperature variations” he told CNA.

Describing his current work, he said “we wake up (or stay up awake) between 1 am to 5 am and wait for the UHF (ultra-high frequency) antenna pass to perform a quick analysis on the latest downlink of the data, in the hunt for a Marsquake on the red planet. As also shown in NASA’s press-release, we have already identified the pressure and ground-tilt signature of a dust devil, and the direction of the vibrations recorded by InSight’s science instruments. Although there’s currently many unknowns in the signals sent back to Earth, the detection of a Marsquake would be of colossal importance”.

Referring to the seismometer, he said that this is the first time a seismometer has been robotically deployed on a surface of another planet.

” This is a very challenging process, as the location does not only have to meet several requirements and desirements, such as to be devoid of slopes and rocks, but also the deployment phase is itself a long process that has been on-going since the 19th of December,” he told CNA.

Furthermore, he said that the remnants of a liquid core would indicate that Mars might have had a magnetic field in its past, over 3 billion years ago.

“Just like Earth, this magnetic field and thick atmosphere protected Mars from destructive solar winds and cosmic rays. During the planet’s early history, this allowed Mars to have a much warmer and wetter climate favourable for thriving primitive forms of life. With the potential of new insights at hand, we might be able to discover what truly went amiss in the history of its evolution” he pointed out.

Dr Charalambous received a Ph.D in Planetary Sciences from Imperial College London, UK in 2013 under full scholarship award and an M.Eng degree in Information Systems Engineering from the same institution in 2009.

For his Doctoral thesis, he worked on the theory and evolution of fragmentation processes, where he developed a novel model which has been applied on several fields of study on Mars.

Since 2013, he has been working as a Research Associate at Imperial College London in the department Electrical and Electronic Engineering. During the same period, he has been part of the SEIS science team and Geology group for NASA’s InSight mission, with a focus on the development and performance analysis of the Short-Period (SP) seismometer. As a member of the Council of Terrains team, he has also helped select the site for safe landing in the equatorial region of Mars, Elysium Planitia, in a process that lasted four years.

He told CNA that his dream is to participate in research for the first manned mission to Mars.

“To be capable of having humans on more than just one planet would be heralded as one of the greatest achievements in the history of humanity”, he told CNA.

He said that his goal is to discover more about the universe and particularly provide a part to the answer for astrobiology’s biggest question: ‘are we alone in the universe?’.

“We currently possess the necessary technological advancements to perform space exploration and answer scientifically whether life exists elsewhere, beyond Earth. This question applies not only on Mars, but also more importantly on the moons Europa, Titan and Enceladus, for which we already have planned future missions. This brings one of the most exciting aspects of my work, to be able play a part in answering what truly lies beyond in the great unknown” he underlined.

Dr Charalambous said that in the next few years more robotic landers will land on Mars to prepare the ground for the first human settlement in the future.

Invited to offer advice to young people, he said that “what I recommend to the younger generation is to get involved in as many competitions as possible (e.g. NASA Space Apps Challenge), seminars and programmes offered from different space agencies such as ESA’s Young Graduate Trainee programme or the more independent European Space Camp.”

“My more generic advice would be to think imaginatively beyond normality and never stop pursuing their ultimate dream, as impossible as it may seem”, he pointed out.

Dr Charalambous said that “now that Cyprus has strongly emerged into the game of space exploration with CSEO, for example with the Mars Upper Atmosphere Network (MUAN), there will be many more opportunities for the young Cypriots to pursue a career in the space industry”.