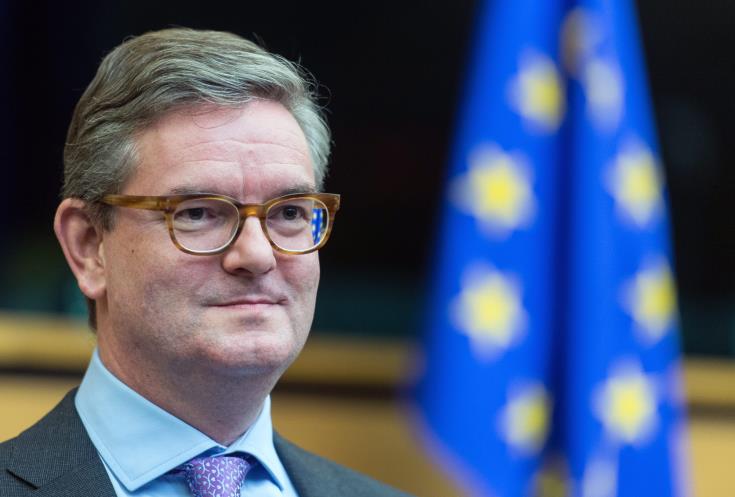 Cyber attacks, the fight against terrorism, cooperation among security and intelligence agencies in the EU are some of the issues European Union Commissioner Julian King will discuss with the Cypriot authorities, during his visit here.

In an exclusive interview with CNA, King, the Commissioner responsible for EU Security, gives a full account of the current open issues in his portfolio, one year ahead of the European elections and makes specific references to the risk of online cyber attacks, the fight against terrorism, dealing with disinformation campaigns from Russia and the continued cooperation of the security and intelligence services in the EU on the path toward the potential future creation of a `European Information Service`.

Asked about his visit to Cyprus, he said “Visits to Member States are an important part of a Commissioner’s job – they enable us to speak with ministers, with parliaments, with all local actors, to better understand national and political contexts.”

This, he pointed out, “is especially true for security, which is first and foremost a national competence, but in which the EU plays a key role in assisting Member States to ensure the security of their citizens.”

“That’s why my visit to Cyprus will focus on security-related issues such as the fight against terrorism and organised crime, cybersecurity and ways in which we can improve the exchange of information,” he said, adding that he would meet with the Minister of Justice Ionas Nicolaou, and the Chairman of the House Foreign Affairs Committee Yiorgos Lillikas and the Deputy Chairman of the House Legal Affairs Demetris Dimitriou, the Chief of Police, Zacharias Chrysostomou, and visit the Cybercrime Centre.

“The work we do on security at EU level affects all Member States, and there is much still to be done to combat the growing and evolving threats we face. Our citizens quite rightly expect us to ensure their security, and we need to see continued progress up to the European elections in 2019 and beyond,” he told CNA.

“Notably, our priorities for this year include moving towards better interoperability of our justice and home affairs information systems – an area where we have already made progress this year in the form of the Schengen Information System, the European Travel Information and Authorisation System (ETIAS) and the upgraded eu-LISA Agency. We will now look to conclude negotiations on interoperability with the European Parliament and Council by the end of 2018.”

Invited to assess the risk posed by Cyber security threats and internet driven propaganda, he noted that “We are taking urgent action to address cyber and cyber-enabled threats. Last September the Commission brought forward a package of proposals designed to build our cyber resilience, to strengthen our cyber deterrence and to support Member states in cyber defence.”

These proposals, he explained, “include the setting up of an EU Cyber Security Agency and a new cyber-certification scheme, to drive up cyber security standards in the connected devices on which we all increasingly rely. And we are investing heavily in security and cyber research and development.”

“We are pressing the private sector – which owns most of the cyber threat surface – to take action to strengthen our collective online security,” he added.

He explained that effective deterrence means increasing the chances of getting caught. “So we are working through Europol to increase our cyber forensic capabilities and to strengthen traceability. We have put forward proposals to improve the cross-border gathering of electronic evidence. And we are working with our partners to try to ensure international rules to govern cyberspace,” he said.

In April, he recalled “we proposed measures to tackle disinformation online, including an EU-wide Code of Practice on Disinformation for internet platforms, support for an independent network of fact-checkers, and a series of actions to stimulate quality journalism and promote media literacy.”

This, he stressed, “is particularly important in the context of upcoming elections. We have already seen how some recent elections, such as those in the US and in France, have been targeted by malicious actors.”

The EU is organising a series of events, culminating this autumn, for Member States and other stakeholders to share best practices on how to keep our democratic processes secure.

“Election security is of course a national competence – but we can defend against malicious attempts at manipulation more effectively if we work together,” the Commissioner said.

“At the same time, we are continuing our work to counter terrorism and combat radicalisation. We are making it harder for terrorists to travel and to get access to money, firearms and explosives. We have stepped up security at the external borders, so that we know who is coming into the EU. And we are taking steps to better protect our public spaces, for example through increased funding to help cities take the necessary steps.”

Asked to comment on the deportation of three Russian diplomats engaged in espionage, he pointed out that “It is not my place to comment on bilateral issues between Member States and third countries. However, it is apparent that interference in other countries` domestic affairs is unacceptable. The EU has always been clear about this and recognises this challenge, as also evidenced by recent discussions in the European Council.”

Called to provide information on Russian interference, currently under investigation, Julian King replied: “Likewise, it is not for us to attribute cyberattacks or discuss specific threats to elections – rather, it is for Member States. But there is a pressing need for rapid and concrete action against concerted attempts at spreading disinformation – such as the work we do to mitigate the immediate effects of such disinformation through the East Stratcom Task Force, a team of 14 Russian-language and communications specialists.”

At the time of writing, East Stratcom had catalogued over 4,000 examples of disinformation since its establishment in 2015, including for example 31 disinformation narratives around the chemical attack in Salisbury and 57 around the downing of flight MH17.

The work done by East Stratcom, he noted, is just one part of the overall effort, as it needs to be complemented by work done in Member States, other EU institutions, and in NGOs and think tanks. To this end, the Task Force works hard to build its cooperation with these other actors and ensure an effective European response.

Asked to assess the security implications of the “golden visa” citizenship for investors scheme, the Commissioner told CNA that “We are currently preparing a report on national schemes granting EU citizenship to investors, in which we will lay out the Commission`s actions in this area and current national law and practices, as well as providing guidance for Member States.”

The report will be based on an in-depth fact-finding study, which will look in detail at legislation and practice in all Member States concerned and publication is envisaged for the final quarter of this year, he added.

Vera Jourova, Commissioner for Justice, Consumers and Gender Equality, will visit Cyprus this autumn to discuss the issue, having previously done so in Malta in June.

“Working in close cooperation with my colleague Dimitris Avramopoulos, Commissioner for Migration, Home Affairs and Citizenship, we have made important progress in our work towards an effective and genuine Security Union, such as denying terrorists the means to carry out attacks including money, firearms and explosives; tackling radicalisation both in communities and on the internet; countering the spreads of disinformation and Fake News; and bolstering our resilience to Chemical, Biological, Radiological and Nucelar-related risks (CBRN),” he added.

In the face of new security challenges and constantly evolving threats, he said, “the only solution for Europe is a joint one; one where Member States, the EU Institutions and the EU Agencies work together efficiently and effectively.”

Referring to sharing of intelligence among relevant authorities of the Member States and the steps towards a single EU Intelligence Agency, the Commissioner recalled that Juncker has announced a future European Intelligence Unit as part of his vision for the European Union by 2025.

“My immediate focus is on making the most by using the existing structures and tools at our disposal to their full potential,” he said, and explained that this includes “making the most of our existing methods of sharing information, and our efforts are already bearing fruit – the Schengen Information System, for example, saw its use increase by 40% in 2016, and a further 30% last year.”

The Commissioner said “its not true that there is no European cooperation on intelligence today. Intelligence agencies from all the Member States work together in the Counter-Terrorist Group (CTG), outside the framework of the Treaties, supporting each other on a daily basis to help keep our citizens safe.”

By In Cyprus
Previous article
Vote Leave referred to police for breaching spending rules, says no evidence of wrongdoing
Next article
Survey shows ‘no profiteering’ in Paphos