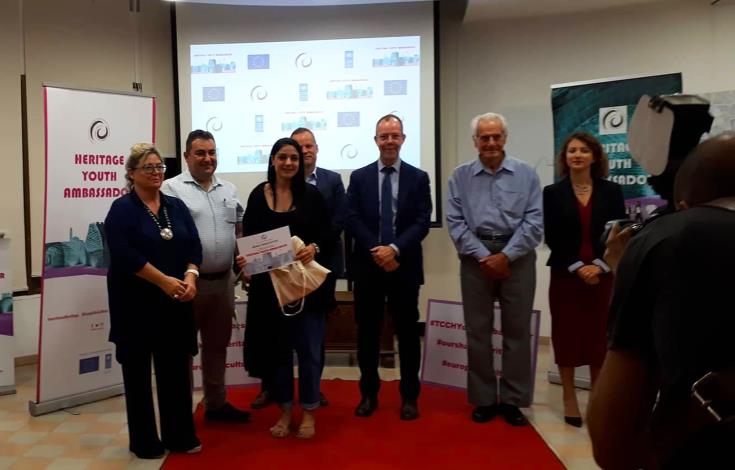 About 40 young Greek Cypriots and Turkish Cypriots were awarded, on Wednesday evening, the title of cultural heritage “youth ambassador” in a ceremony at the Home of Cooperation, in the Nicosia buffer zone. The youth ambassadors are expected to boost the work of the bicommunal technical committee on cultural heritage both through their input with fresh ideas and by disseminating it to the younger generation.

Addressing the event Kjartan Bjornsson, Head of the Cyprus Settlement Support Unit of the European Commission noted that often “we imagine that young people feel that they are not been heard; they face a wall of indifference of people believing that they know better what needs to be done.”

“We would like you to prove this wrong and we believe that it is important to listen to what young people have to say and to make sure that what we do every day in our work reflects also your input,” he said.

He continued adding that “we offer you a fair chance of influencing what is going on in terms of cultural heritage.”

Bjornsson also said that one should not underestimate the power of change and referred to that extent to climate change activist Greta Thunberg. “We have seen how that one young girl has suddenly taken center stage and has gotten every adult in the world to have an opinion about her,” he pointed out, adding that “she has managed by dedication and perhaps a bit of luck to influence what other people are saying”.

“I think that should be our benchmark,” he noted.

The European Commission official said that “it is great that we are preserving cultural heritage in the real world but we also need to look
at how we use technology in the best possible way to increase the access to those cultural heritage monuments.”

He asked the youth ambassadors to use technology in collaboration to “help us increase the real impact of this work in the minds of people; Use this in a constructive way to create a different momentum.”

Fundamentally, he noted, “let us not forget why we are doing this: Yes, we want to preserve cultural heritage but the aim of what we want to achieve here is to bring the communities together in a united Cyprus. That is the vision we all have.”

On her part, Tiziana Zennaro, UNDP Senior Programme Manager who came up with the initiative, said that when the call for the youth ambassadors was launched on Instagram, “we received almost 200 individual applications from young Cypriots from Paphos to Karpas, from Kyrenia to Larnaca, from Limassol to Famagusta.”

Ali Tuncay, the Turkish Cypriot head of the Technical Committee on Cultural Heritage spoke of a “historic moment”.

“We never mentioned what we can achieve if we cooperate and work together,” he said, adding that “now we are giving you a chance to work together. We are sharing our responsibility for the protection of cultural heritage of this island.” Tuncay expressed the hope that “with your support we can achieve a lot of good things for the benefit of this beautiful island.”

On hi part, Takis Hadjidemetriou, the Greek Cypriot head of the Technical Committee on Cultural Heritage also spoke of a “special day”.
“The cultural heritage of the whole island is the common effort of all of us,” he said, adding that “culture knows no boundaries and no obstacles.”

The Technical Committee, he noted addressing the youth ambassadors, “hands over to you the monuments we have preserved in cooperation with UNDP and the EU.”

“It will be in your duties to get to know the cultural heritage monuments and to look after them and recommend them to other people,” he said, adding that “you will get to know Cyprus, its history and our culture.”

According to Hadjidemetriou, the monuments tell their own story, that is the true story of our country and its people. The story, he noted, “of an island at the crossroads of civilisations, the multicultural history of Cyprus.”

“Knowing our past leads us to understand better the situation of today and opens the prospects for a Cyprus of tomorrow with mutual understanding, respect and compassion,” he noted. Hadjidemetriou also said that culture can become the foundation upon which any future settlement can be built.

The technical committee, he noted, has succeeded in doing something because Greek and Turkish Cypriots are working together in a spirit of cooperation, mutual trust and understanding.

“The most important achievement of the Commitment is the example it gives to society that cooperation is possible and that cultural heritage unites and guides us in a spirit of mutual respect,” he stressed.

“You are here to continue and disseminate the message of cooperation to all especially to the young people on both sides of the divide,” he told the youth ambassadors.

From 2012 to the end of 2018, with the support of the EU and UNDP, the committee conserved, structurally supported, physically protected or restored 31 heritage sites island wide, including Orthodox, Maronite and Armenian churches, mosques and minarets, fortifications, hamams, aqueducts and watermills.