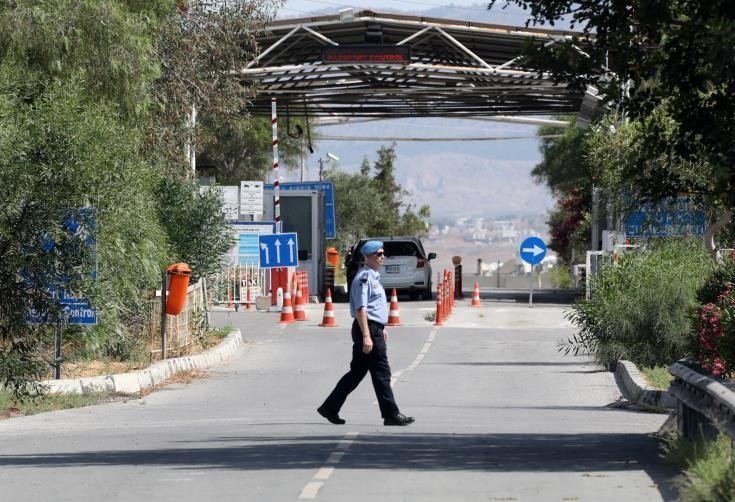 The Republic of Cyprus put into effect on Sunday the decision taken last Friday to reopen the crossing points for Cypriot citizens and all those who legally reside in the Republic. The illegal regime in the occupied areas still allows only enclaved or Maronites to pass and has denied this morning two people to pass as their COVID-19 negative test was in Greek and not in English.

Crossing of people is done under special conditions. As the Interior Ministry announced on Saturday all those who wish to cross must show a negative COVID-19 test done 72 hours prior to their crossing. Random tests will be conducted at the checkpoints. The categories who need to show a negative test, once, include:

a)Turkish Cypriot workers who must also show a certificate by their employer including their full name and social security number. Copies of certificates or electronic messages are allowed.
b) Greek Cypriot workers who permanently reside at Pyrgos Tyllirias and their jobs are in Nicosia. They need to carry a certificate by their employer with their full name and social security number. All ambulances will be allowed to pass the crossing point.
c) Turkish Cypriot students who attend school or any other academic institution in the Cyprus Republic. They are allow to cross only via Ledra Palace check point in vehicles provided by the schools/institutions.
No private vehicles will be given permission to pass. All students need to carry a certificate of attendance by the school/institution and are asked to contact their school or college/university to organize their transport.
d) Enclaved or/and Greek Cypriots and Maronites who resettled in the occupied areas
e) Cypriot citizens who live in the occupied areas and receive medical or pharmaceutical care at the Cyprus Bank Oncology Center, the Cyprus Institute of Neurology and Genetics or any other public or private clinic or hospital in the Cyprus Repubic. A medical certificate is needed by a doctor or a clinic/hospital with full name of the patient

Only few people passed via Agios Dometios  and Ledra Palace checkpoints this morning. Turkish Cypriots who will cross tomorrow for the first time following the reopening of the crossing points, showed up just to issue a vehicle insurance. The illegal regime in the occupied areas still does not allow Greek Cypriots, except enclaved or Maronites, to cross the checkpoints.

At Agios Dometios crossing point a few people, mostly enclaved, passed to go back to their villages. In two cases the illegal regime did not allow people to pass because the COVID-19 negative test was in the Greek language while an English one is needed.

There was more traffic at the checkpoint in the Cyprus Republic government-controlled areas as more Turkish Cypriot workers were waiting to cross. They had to stay in the Republic due to measures imposed to prevent the COVID-19 spread.

Following the “health ministry’s”  announcement in the occupied areas that workers, students, patients and Pyla village residents are allow to pass with a negative coronavirus test, more Turkish Cypriots passed the Agios Dometios checkpoint to go to their jobs or meet with their employers or to issue a car insurance. They all carried negative tests done by the illegal regime at a hospital in the occupied Nicosia as no tests at private clinics or labs are allowed.

A couple of UN peacekeepers were monitoring the passages.

The opening of the crossing points was decided last Friday by the Ministerial Committee, responsible for the handling of coronavirus. The Committee met with the Scientific Advisory Team, under the President of Cyprus, Nicos Anastasiades.

Deputy Government Spokesman, Panayiotis Sentonas, said that the decision might change, depending on the epidemiological situation.