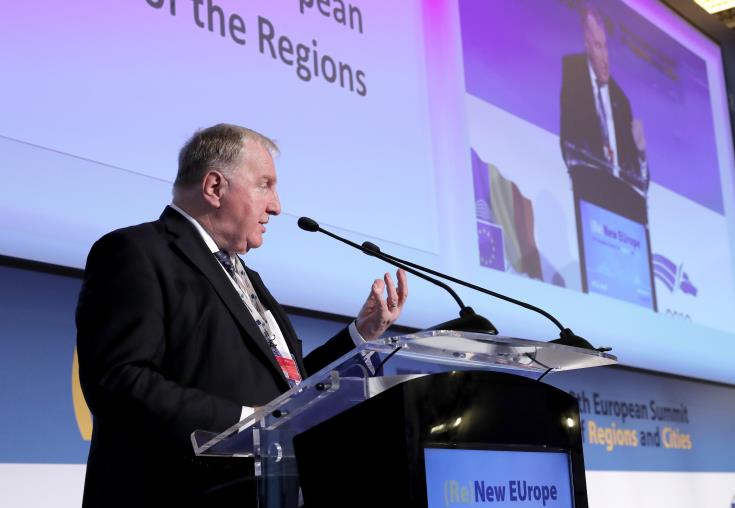 The EU is not Brussels and Strasbourg, or the member states, but every region, city, town and village and we need to have in mind that local governments deliver 70% of EU laws and therefore they need more empowerment, Committee of Regions (CoR) President Karl-Heinz Lambertz has told the Cyprus News Agency.

Lambertz is visiting Cyprus for the General Assembly of the Assembly of European Regions that takes place in Larnaca. He also participated in a Citizens’ Dialogue event for the Future of Europe, at the Municipality of Strovolos.

In an interview with CNA, Lambertz said that if elections are a good indicator to assess citizens’ interest and engagement in politics, the recent European elections had the highest turn-out (50.97%) compared to the past 25 years, which was a clear sign that the EU matters.

“The European election results sent a clear message that the vast majority of citizens firmly believe that their future lies in a united European Union and now it`s for the EU to deliver results”, he pointed out.

Lambertz underlined that it needs to be stated again and again that the EU is not only Brussels or Strasbourg, it is every member state, region, city, town and village.

“Listening and engaging with citizens in the EU is the only way to ensure it is more receptive to their needs. Engaging citizens in the EU must however not only be during elections: it needs to be permanent, continuous and responsive,” he told the CNA.

CoR President said that it has been 25 years since the European Committee of the Regions was created allowing regions and cities from every member state to formally contribute to the EU decision-making and furthermore, one-third of the current EU budget is currently committed to regional funds – cohesion policy – delivered together with regions and cities. “By now EU governments should recognise the importance of local and regional governments in the EU construct,” he said.

He recalled that in 2017, in a joint declaration in Rome, the EU leaders did explicitly refer to the importance of working together for the EU`s future including with the local and regional level. Recently, he added, the European Commission brought together local, regional and national politicians to review the way EU policies are made so they are more inclusive.

“This Task Force rightly called for a new way of working, involving regions and cities. However, despite these efforts, EU leaders have yet to formally commit to change. It is worrying that during their meeting on the EU’s future in Sibiu in May 2019, the leaders did not recall the work with the local and regional level. Later this month they will offer their vision for the next five-year mandate so let`s hope they will reaffirm the need to join forces,” he pointed out.

Lambertz said that to do what is needed in all levels of government it ought to cooperate to improve its laws, show solidarity and ensure no one is left behind. It`s also critical, he added, to remember that its local and regional governments – who deliver 70% of EU laws and are the most trusted level of government, a fundamental part of European democracy.

“By empowering its one million local politicians through strengthening their role in the decision-making process, the EU will improve the quality of its laws and strengthen its democratic legitimacy. We need to demonstrate that only by working together as a Union can we solve problems, such as unemployment, climate change and social exclusion”, he said.

The major challenges of the regions are broadly speaking job creation, social integration, regional inequality and making the transition to a carbon-neutral economy. He added that if we want to overcome these challenges together, regions and cities crucially need stable long-term investment so the post-2020 EU budget will be decisive.

“Today the level of public investment in the EU is simply too low and there is an urgency to close this gap to allow regions and cities to deliver”, he said.

According to Lambertz, an ambitious cohesive Europe therefore needs an ambitious EU budget which is why the Committee and the European Parliament are demanding an increase in member state contributions from 1% to 1.3% of Gross National Income.

“We want a commitment that one-third of the next EU budget is maintained for cohesion policy. It cushioned the impact of austerity and for every Euro spent on cohesion policy, it returns €2.7. One quarter of cohesion funds are currently for climate action and since 2014 €16.5 billion has been used for social inclusion projects integrating 1.2 million vulnerable people, including migrants,” he said.

He also pointed out that it is the only European policy that brings EU, national, local and regional actors together to shape and deliver growth strategies based on common values. “It is quite simply the most effective way to show that Europe is about cooperation and can only be built locally, together with our communities.