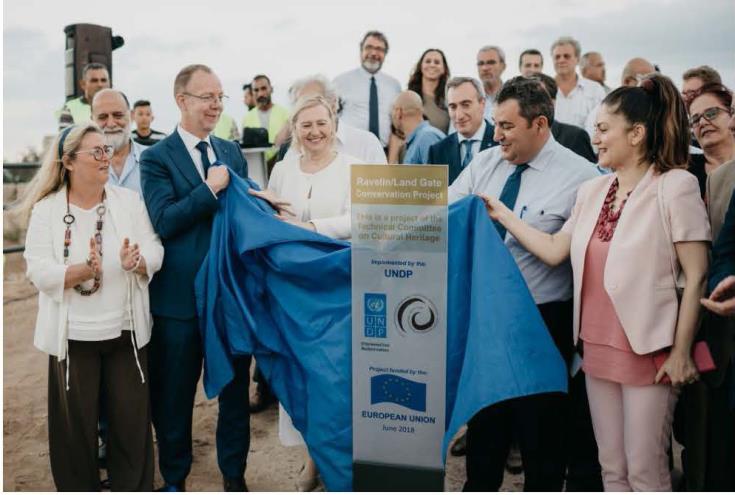 More than 400 people attended an event marking the completion of conservation works to the Ravelin/Land Gate in the Turkish occupied town of Famagusta.

The event, held on Tuesday, was organised by the United Nations Development Programme (UNDP) in partnership with the bi-communal Technical Committee on Cultural Heritage and the European Commission.

In a press release, the UNDP said conservation works to the Ravelin/Land Gate of Famagusta started in February 2017 and were completed in June 2018. The total cost of the conservation works was of approximately €670,000 fully funded by the European Union.

“The European Union has accompanied and supported the Technical Committee from the very beginning. Since early 2012, €14.7 million has been provided by the European Union through the Aid Programme for the Turkish Cypriot community to implement the priorities of the Technical Committee on Cultural Heritage. This partnership underscores the importance of unity and respect as core values of the European Union. The European Commission is delighted to have been able to fund this excellent work, a clear example of how Cypriots can work together for peace,” Kjartan Björnsson, Head of Unit – Structural Reform Support Service, European Commission, said, addressing the event.

Greek Cypriot Representative of the Technical Committee on Cultural Heritage Takis Hadjidemetriou said “we have received Ravelin/Land Gate marked with a history of wars and conflicts and we are now giving it back, a place open to peace, understanding and collaboration.”

Turkish Cypriot representative of the Committee Ali Tuncay said “the Famagusta walls have touched and shaped the lives of many people,” adding that “cultural heritage and different cultures should no longer be factors that cause conflicts but factors that contribute to cooperation, peace and prosperity of the Turkish Cypriots and Greek Cypriots.”

Elisabeth Spehar, Special Representative of the UN Secretary General and Head of Mission of the UN Peacekeeping Force in Cyprus (UNFICYP), said in an address that “preservation and restoration projects of this sort, beyond the value of the physical outcome of the projects, can be strong foundations for exploring shared history, understanding the narratives of the other and contributing to reconciliation in societies that have experienced conflict.”

She added that “we as UNFICYP will continue our attempts to garner support for our civil society partners working on inter-communal heritage and legacy preservation issues across Cyprus.”

Senior Programme Manager and Head of Office of the UNDP in Cyprus Tiziana Zennaro said “Ravelin/Land Gate, after one year of conservation works, will be reintegrated in the city.”

She added that “these walls are one of the best examples of military architecture which have arrived to our days,” and that “this is why the Technical Committee on Cultural Heritage is focusing on this city and why the European Union has invested so far more than €4 million in the protection of its cultural heritage.”

“At this point, with six projects already completed and four undergoing, sustainability of these interventions is becoming a high priority. UNDP stands ready to continue supporting the Technical Committee’s efforts in Famagusta,” Zennaro pointed out.