Completion of excavations at Kition-Pampoula, 2022

The Department of Antiquities, of the Ministry of Transport, Communications and Works, announces the completion of the 2022 archaeological excavations of the French Archaeological Mission at ancient Kition (Larnaka-Pampoula).

The French archaeological mission conducted a four-week campaign at Kition-Pamboula in October 2022. The objectives were two-fold: firstly, to complete the excavation of a possible pit, which had been identified in 2021 and which, although partially excavated, had yielded a series of Phoenician ostraca of the Classical period; secondly, to enlarge the excavation of the corresponding Classical floors, in order to better understand the context of the supposed pit.

Three new trenches were opened in sector 11, located to the Northwest of the site (fig. 1). In the central one, located immediately to the South of the possible pit, a thick layer was excavated, consisting of red brick soil mixed with many heterogeneous fragments of roof plaster, mortar and gypsum slabs probably from a nearby destroyed building. The material dates to the Classical period. The layer illustrates a vast filling operation, which occurred at the end of the Classical/beginning of the Hellenistic period. This thick horizontal layer sealed another layer, which followed a continuous slope towards the south (fig. 2). This layer contained plaster fragments, plaster amphora stoppers, pottery fragments (most notably of transport amphorae and basins), as well as altered pieces (pierced bases, fragments filled with plaster, etc.). The supposed pit containing ostraca was a constitutive part of this layer, characterized by a more greyish and sandy soil matrix: additional pieces were found, the total amounting to 99 by the end of the campaign (fig. 3). The new ostraca are similar to the ostraca found during the 2021 campaign: short texts written in black ink on pottery sherds and, more rarely, on stone fragments; they present the same word sequence and contain many numerals that point to accounting operations. They all date to the Classical period, more precisely the 4th century BC.

The abovementioned finds have led to important interpretations. The depositional context of the ostraca can now be understood:  they were not thrown in a pit, as originally presumed; they were not used as fill for floor layers (as was the case at Idalion). Rather, they were part of a debris cone (debris deposited in a conical shape), formed in an open area, following a destruction episode or a cleaning operation. What was their original context? As already underlined, the layer is made of a sandy soil matrix. The surface of the material is heavily worn, as if it had remained immersed in salted seawater (fig. 4). It can thus be inferred that the debris cone was a result of a dredging operation conducted in the nearby harbour basin. Another possible scenario is, however, possible. Throughout the layer, tiny pieces of crystal were found, and the material assemblage points to artisanal activities. The alteration could have thus been result of the use of alum salts. It is well-known that alum was widely used in antiquity, most notably in the textile industry. It is expected that during the next field season the excavation of the layer will be completed and the validity of the hypothesis will be tested. 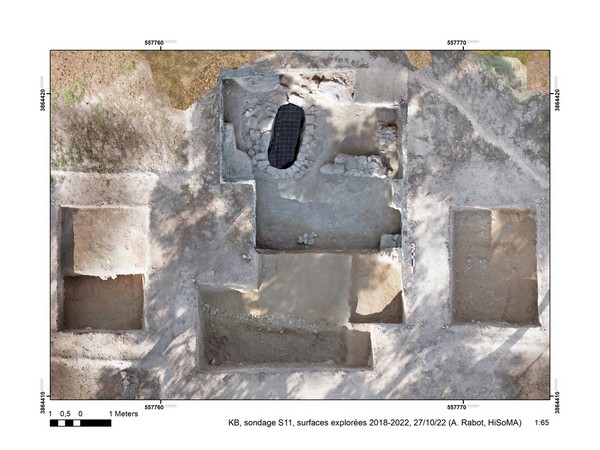 Fig. 2. Detail of the sloping layer with pottery fragments in situ. 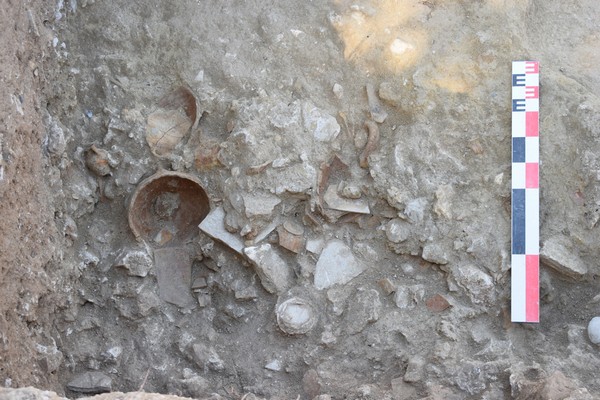 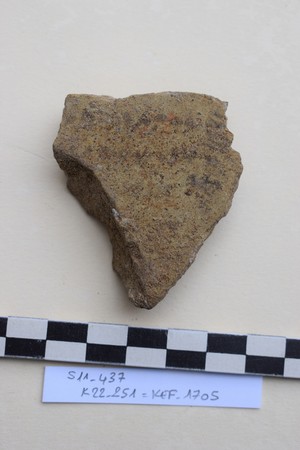 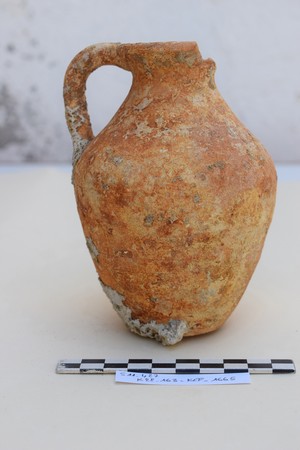