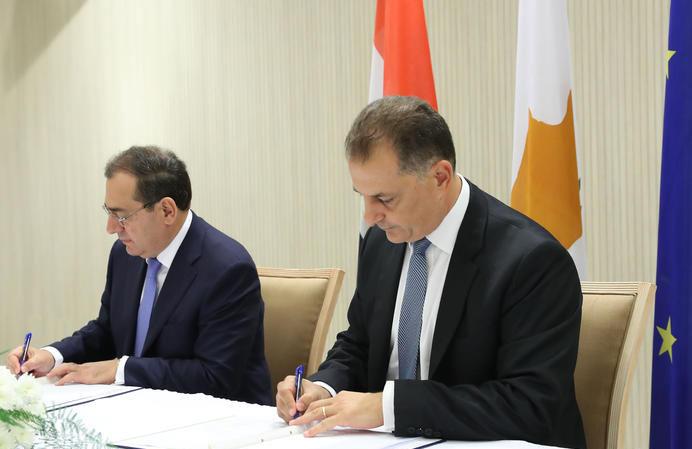 Cyprus’ Energy Minister Yiorgos Lakkotrypis and his Egyptian counterpart Tarek El Molla signed the agreement at the Presidential Palace in Nicosia at the presence of the Head of the International Relations and Enlargement Unit, of the Directorate-General for Energy of the European Commission, Anne-Charlotte Bournoville.

“Today’s signing is an important milestone, not only for Cyprus but also the entire Eastern Mediterranean region. It constitutes, for Cyprus, another crucial step towards its goal to efficiently exploit the underwater wealth in its Exclusive Economic Zone (EEZ), and specifically gas from “Aphrodite”, for the benefit of all Cypriots”, said Lakkotrypis in his speech during the ceremony.

He added that the agreement reinforces the joint efforts by the countries in the Eastern Mediterranean to establish the synergies required for attracting the multibillion infrastructure investments for hydrocarbons production and transport.

He also pointed out that the Pipeline IGA was the first of its kind in the region, reaffirming the close ties between Cyprus and Egypt, and establishing, the two nations’ strategic partnership in the energy sector.

Lakkotrypis explained that the Agreement itself aimed to promote the transport of natural gas from Cyprus to Egypt by safeguarding the secure and timely development, construction and operation of a direct submarine pipeline across the respective EEZs. To this end, he added, a joint monitoring committee would be established within the next 30 days, consisting of representatives from the energy ministries and regulatory Authorities of the two countries.

Cyprus and Egypt are now committed to establishing and maintaining the necessary and favourable conditions for the project’s implementation, including the timely issuance of permits, whilst complying at all times with international treaties and rule of law and, of course, the EU’s environmental and safety standards and practices.

As the Cypriot Minister stressed, once build, the direct submarine natural gas pipeline crossing the Cypriot and Egyptian EEZs, would be beneficial to all parties involved.

“Ultimately, through reexports of “Aphrodite” gas in the form of LNG, the pipeline will allow for the transport of the first molecules of East Med gas to the EU, thus contributing to the Union’s much sought-after security of supply and diversification of sources and routes”, he said.
Egyptian Minister of PetroleumTarek El Molla said that the signing of the IGA was a positive step toward monetization of gas discoveries in Cyprus fields, as well as encouraging further exploration activities in the region.

“The energy potential of the Mediterranean basin can act as a catalyst for further cooperation in the region. Energy is a win-win opportunity for the new political partnerships, the integration of the markets and the guarantee of stability and growth in the region”, he said.
He added that Egypt would play a significant role in the Eastern Mediterranean’s gas future with its strategic location and available infrastructure.

“Egypt has the potential to become a physical, regional trading hub by sharing future natural gas resources, export and transportation infrastructure of Egypt with neighbouring countries”, he said.

He added that the country could provide important contributions to the European energy security.

He also pointed out that the cooperation within the Mediterranean was at the top priorities of the country, aiming to the prosperity of the region.

The European Commissions’ Representative Anne-Charlotte Bournoville stressed that Eastern Mediterranean provided huge opportunities for all the countries in the region, not only to strengthen their energy security but also to reinforce their economies and to develop strong regional cooperation links.

She added that the EU strongly supports the development of the region as a gas hub and a future gas supplier to the EU.
“We highly value gas supplies from the region as a major alternative source and route which can make a valuable contribution to our EU diversification policy”, she said.

She also stressed that Europe was a very attractive market for Eastern Mediterranean gas, because it would continue to import a lot of gas due to the depression of the domestic resources and because it has a deeply integrated and competitive gas market.

“This combined with the geography proximity and the magnitude of resources in the region makes us ideal partners in working together to bring forward the very significant investment that will be needed to tap the huge resources of the Eastern Mediterranean”, she added.
She also said that there was a number of different export routes which were available to connect Europe with Eastern Mediterranean, which did not preclude each other and could be even mutually reinforcing.

She also stressed the high importance that the EU was attaching to promoting LNG as an alternative source of supply and the use of the existing LNG terminals in Egypt.

She also said that the EU would continue playing the role of facilitator and providing political support, diplomacy, technical support and financing for the development of Easter Mediterranean gas.

By In Cyprus
Previous articleOfficers suspects in trafficking case, released
Next articlePaedophile arrested for CCTV camera