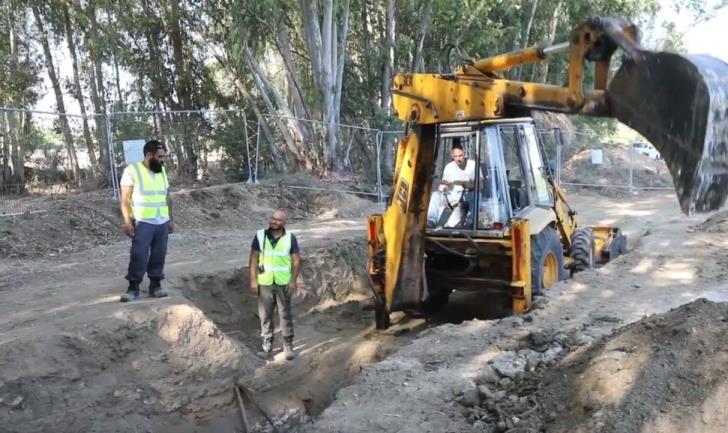 The Committee on Missing Persons (CMP) started Thursday excavations in the Trachonas area, in the Turkish-occupied part of Nicosia, in search for a third burial place containing the remains of Greek Cypriots who went missing in 1974. Two burial places were already discovered in the wider area back in 2015.

Greek Cypriot member of the CMP, Nestoras Nestoros, told CNA that ongoing excavations in Trachonas are taking place in a non-military area, near the “central prison”, while another operation is expected to take place in the next few months, within an area designated as military zone.

The office of the Greek Cypriot member has information on seven Greek Cypriots who went missing in the areas of Trachonas, Neapolis and Omorfita, in the Turkish-occupied northern part of the Cypriot capital, Nicosia.

Back in 2015, the CMP discovered the remains of 36 missing persons in total, 20 in one area and another 16 in a second spot in Trachonas.

At the same time, the CMP continues excavating a well in Strovolos, in search for two Turkish Cypriots who went missing during the 1963-64 period. Four more crews continue digging in various sites in the Turkish-occupied part of the island.

CNA visited the excavation site in Strovolos, near the Linear Park at Pedieos river, where the CMP started working last Monday. The crew is using an excavator to dig the well, as well as other machinery to penetrate the rock and reach the bottom of the well.

The crew is assisted by aerial photography taken by the British in 1963, only a few months before the start of bi-communal clashes in Cyprus. These images provide useful information, showing the wells that were in use during the said period.

On another note, CNA learns that the Turkish army provided the office of the Turkish Cypriot member to the CMP with access to aerial photography from 1974, which could be used in the search for missing persons.

The photos were taken both before and after the Turkish invasion of Cyprus, in the summer of 1974. This is the first time the office of the Turkish Cypriot member gains access to this material.

The results of this move will depend on the progress of ongoing excavations, a reliable source told CNA.

By In Cyprus
Previous articlePuppy love: lion, tigers and hyenas reared by dog at Chinese zoo
Next article24 Syrian refugees brought to shore in Protaras